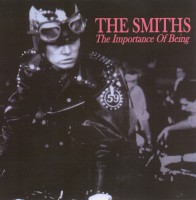 5 What Difference Does It Make? / Single A Side January 1984

7 Reel Around The Fountain / The Smiths February 1984

9 The Hand That Rocks The Cradle / The Smiths February 1984

12 William It Was Really Nothing / Single A Side August 1984

13 Shoplifters Of The World Unite / Single A Side February 1987

Earned It Yet Baby / The World Won’t Listen February 1987

When The Smiths first appeared in 1983, I ignored them. Floating in on the arse end of post punk and new pop, they may have been a breath of fresh air amongst the programmed tick tock of electro pop or designer soul, but they reminded me of an altogether different pop vision, the Postcard Records of Scotland ideal. All that whiter than white ‘pure’ pop and fey rating of romance over sex had been bad enough first time round.

Then, quite unexpectedly, something happened. Maybe it was the iconic sleeves, but more likely it was Morrissey’s words. I’d never heard anything quite like them. They spoke absolutely of the times, expressing his and our innermost thoughts, casually thrown into the rhythm of Johnny Marr's guitar. Nothing looked like The Smiths and nothing sounded like them either.

In seriously adult times, The Smiths bought adolescence back to the charts, providing fantasies of innocence for those in the awkward space between childhood and adulthood, who dream of wanting something more from life, yet know deep down they will ultimately relinquish those dreams and buckle down to a life of terminal mediocrity. In the age of Thatcher, when mock sophistication and money was all, The Smiths spoke of retreating from the world. Hooked on the glamour of the misfit, they turned glorious misery into two-minute bursts of otherness in the heart of the charts.

Their finest moments, ‘Hand In Glove’, ‘How Soon Is Now?’ and ‘Still Ill’, were songs of reproachful, avenging misery, and naked desperation. If there was any laughter at all, it was buried deep within, scornful and scathing. If they had only produced the more sunny, cuddly stuff like ‘Heaven Knows’, ‘Ask’ or ‘Vicar In A Tutu’, they would merely have presaged the perky negligibility of groups like The Housemartins, the sound that grinned itself to death. The Smiths were the heroic party poopers at the Top Of The Pops office do, glowering at the forced jollity. They were those pasty youths at parties who cling to the dark corners in chaste disdain, driven by the vague conviction that all merriment is a lie.

Sometime around Meat Is Murder, we discovered Morrissey did have a sense of humour after all. But, the extent to which he was funny seemed to diminish his impact. While it made him more loveable, it made the music easier to live with, depriving it of its edge. Even so, Morrissey was a new kind of star, the like of which we had never seen before. Steeped in the history of pop, he had an acute understanding of fan obsession because he was an obsessive fan himself, and he used the mechanics of idolatry to introduce an intelligence and difference into pop.

Morrissey was a natural. He had that indefinable it. He was a character in an era of nonentities. I know many grown men who would have crawled over broken razorblades to mop Morrissey’s brow, or pull a gladioli from his back pocket. And that had nothing to do with his or their sexuality. The whole point and purpose of Morrissey in his absolute prime was that he was needed, not as a figure of the eighties, but as a horrified figure against the eighties, one who turned his back on the march of pop time and became the last keeper at the gates of self pity, apartness and exile. I for one was thankful for that.