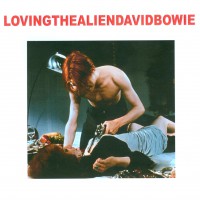 06 The Prettiest Star / Single A Side Recorded March 1970

13 Hang On To Yourself / Ziggy Stardust Recorded November 1971

11 Time Will Crawl / Never Let Me Down Recorded October 1986

On 6th July 1972 David Bowie unveiled ‘Starman’ on Top Of The Pops to 14 million viewers, including my innocent 12 year old self. When he nonchalantly draped an arm across Mick Ronsons shoulder, imaginations went into overdrive, not least my dads as he muttered something about ‘bloody poof’s’.

It was all so very different then, Bowie looking for all the world like an exotic creature from outer space questioning all the old clichés and values. Believing he truly was an alien I was hooked, Aladdin Sane one of the first LP’s I ever bought with my hard saved cash. Later I witnessed him at Wembley reincarnated as the Thin White Duke, rising through the blinding white light. Bowie, Bolan and the glitter rock of glam prepared us for the nihilism that was to follow. It was no coincidence that when punk began to flower, Bowie proved the catalyst pulling lost suburban youth together.

Of course, once upon a time David Bowie was regarded as a no hope, one hit loser. During the 60’s, as David Jones he graced the front pages of the music press promoting his various singles, all of which flopped spectacularly. ‘Can’t Help Thinking About Me’ was his first as Bowie but it made no difference as he worked his way through a variety of labels like a starving whore. The records themselves were quite odd like his self titled debut LP, one of the weirdest releases ever with ‘Please Mr Gravedigger’ featuring Bowie as sneezing child murderer quite the weirdest thing on it. After years of neglect a breakthrough finally came in 1969, courtesy of ‘Space Oddity’ cashing in on the moon launch. But when the follow up, ‘The Prettiest Star’ sold a meagre 798 copies Bowie disappeared back into the cosmos.

Given this awkward pre-history, The Man Who Sold The World was a loud revelation. Portraying himself as a world weary film starlet the music was startling and intense, ‘All The Madmen’ taking troubled inspiration from his doomed, schizoid half brother Terry. On the surface 1971’s Hunky Dory was a far brighter record but underneath was one of its authors darkest creations as he tipped out the homoerotic, drugged up, death obsessed, occult tinged contents of his fucked up mind. But what came next surprised everyone!

At his very best Bowie was always ahead of the game and his re-emergence in 1972 as Ziggy remains one of the most notable ruptures in rock history. An explosion of sex and style that changed the ideological battlefield overnight, The Rise And Fall Of Ziggy Stardust And The Spiders From Mars emerged as one of the most coherent concepts of the age despite its contents being drawn from a years worth of sessions, that originally included ‘Amsterdam’, ‘Holy Holy’ and ‘Velvet Goldmine’. Over the next 18 months Ziggy almost destroyed Bowie, so he bravely laid him to rest in July 1973 after he gave us Aladdin Sane, conceived as Ziggy goes to America with a sinister power all of its own.

Diamond Dogs was intended to be Orwell’s 1984 set to music but became something completely different. Cinematic in scope and scary as hell its best encapsulated on ‘Sweet Thing/Candidate’, a stunningly bleak glimpse into the abyss that remains one of the most comprehensively imagined of all Bowie recordings. Still suffering from the aftershock of his alter ego’s deadly planet ride, Bowie escaped to the States and the elaborate Diamond Dogs revue. Heralding the start of his coked out cabaret phase, David Live showcased an impressive, slowed down version of the epic ‘Rock’n’Roll Suicide’. The spiky, orange hair was ditched in favour of a side parting and baggy suit and in a desperate search for reality in his increasingly fake world, he tuned into Philly R&B, recording the plastic soul of Young Americans.

By 1975 he had installed himself, his dangerous cocaine habit and strange fascinations in Los Angeles, the original City of excess. After filming the peculiar but superb Man Who Fell To Earth he created Station To Station and the Thin White Duke character while in the throes of a chemically sustained psychic dementia perilously close to insanity. Bowie himself can remember absolutely nothing about it.

Spiritually at his lowest ebb he relocated once more, holing up in Berlin with Iggy Pop while starting work on the experimental Low with Brian Eno. That record came as a real shock, so withdrawn and messed up was he? Yet it remains remarkable, structurally unique and sonically radical, like nothing that had ever been before. Heroes portrayed an even gloomier aura of malaise while Lodger, apart from the anti wife beating ‘Repetition’, could never top its predecessors and didn’t. Musically the Berlin trilogy left Bowie confident but keen to move on. He credited Eno with his renaissance but then in typical style dropped him for the next 15 years. Reflective and reconnecting with his past Scary Monsters proved to be some kind of purge. The measured melancholy of ‘Ashes To Ashes’ said it all, a comprehensive hymn to the past, and in particular the theatre of Pierot and the junkie Major Tom.

Bowie disappeared again and when he beamed back to earth in 1983, everyone’s favourite sick alien was tanned, healthy and pushing Lets Dance. Chic’s Nile Rodgers had produced a slick, disco album with Bowie on autopilot, determined to make some real money. Momentarily he played entertainer for the mainstream, a whole new audience who had previously thought of him, if at all, as some weirdo drag artist. Predictably he hit new supernova heights but after Tonight and Never Let Me Down had absolutely no artistic credibility left. He was painted as a self indulgent rock star, sat at home counting his money. But that is where Bowie is different. To piss everyone off he formed Tin Machine who were deliberately antagonistic and cruelly underrated. Bowie the superstar died immediately, replaced with Bowie the artist who saw out the 80’s with the most cutting edge stuff he’d written for years, reacting to rising bands of resistance such as Sonic Youth and the Pixies and anticipating the rise of grunge.

With the slate wiped clean Bowie re-launched his solo career. The Buddha Of Suburbia, featuring music reconstructed from Hanif Kureishi’s TV play finally gave him some much needed credibility, the title track in particular sounding uncannily like the ghost of Ziggy. The long suffering faithful, me included, had started listening again. Eno was welcomed back, Outside successfully rescuing Bowies reputation as a groundbreaking left field artist for a post pop era.

By 1997 he was still making headlines for his extra curricular activities: his painting, his supermodel wife and particularly his passion, foresight and business interests in the World Wide Web. Earthling was yet more proof he could still make relevant albums despite being critically ridiculed as a drums ‘ n’ bass project by a 50 year old. However those who listened without prejudice found several Bowie classics, the Trent Reznor collaboration ‘I’m Afraid Of Americans’ being one of them. It really captured the moment and so in his own way did David Bowie. Hours, Heathen and Reality  saw him move from avant dance, cold synthesiser tones to a warmer, more organic sound. Strangely the moment he retreated from the cutting edge he began appealing to a younger generation.

Right now he’s one of the few icons who are in any way relevant. These days the cultural and musical map looks completely different and it was David Bowie who helped redraw it. He has become emblematic of a new breed of once fallen hero who has risen time and time again to challenge a changing audience. Definitely a rare species, maybe he really is an alien from another world.