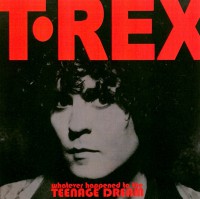 1. Children Of The Revolution (Single A Side September 1972)

It all started with Marc Bolan and T.Rex, no-one else. Before the boy with the corkscrew hair I had no idea what pop meant. I thought it was the Carpenters LP’s my Dad played, or Bridge Over Troubled Water, or even his Dylan Greatest Hits. I wasn’t much interested anyway, what with footie up the park, jumpers for goalposts and my first life defining moment; the shocking realisation that girls were sugar and spice and most things nice.

Of course, when you’re a pre-teeny tween your world and mindset can change a million times a day for no apparent reason and just a year later, pop meant everything. Suddenly it was everywhere, mainlined into my head and out of my tapping toes, from the radio, Top Of The Pops and those 10p Music For Pleasure Hot Hits sound-a-like LP’s adorned by bikini clad girls in sporty scenarios.

Amidst all the novelty schlock and bubblegum I was losing myself in I couldn’t help but notice a song that was instantly more alluring and magical. Hearing T.Rex’s ‘Get It On’ for the first time, before I even knew what Bolan looked like, was my key to the secret mysteries of pop power and rock’n’roll glamour. Watching him on Top Of The Pop’s a week later, the glitter sparkling beneath his eyes, was even more mind blowing and my second life defining moment.

Luckily for me, Marc Bolan, Bowie and glam arrived at just the right time, instigated of course by the snappy foot tapper with an electric neo-rockabilly groove that was ‘Ride A White Swan’. Pop had been screaming out for something new to galvanise a generation sick to death of the sanctity of The Beatles and the crooked myths of the sixties. Initially Bolan was its very heart, banging out a brilliant new teen anthem every couple of months; ‘Jeepster’, ‘Telegram Sam’, ‘Metal Guru’, ‘Children Of The Revolution’, ‘Solid Gold Easy Action’ and greatest of them all, ‘20th Century Boy’, all ripe and ready for pre pubescent kids awaiting the teenage dream. Even now, it’s impossible not to love them, not to get suckered in by their sweet simplicity and Bolan’s innocent boogaloo.

More often than not T.Rex’s importance to the seventies generation has been overlooked, largely because of the continuing power of Bowie. And yet, without Bolan’s mini masterpieces it could be argued we may never have found Bowie in the first place. Or maybe it really was like Bolan claimed all along; that he did all the work and kicked in all the doors only for Bowie to saunter in and take all the credibility.

There’s no doubt that for those first few years, on all the singles and albums like Electric Warrior and The Slider Bolan was incredible but from Tanx on he began to slip. Finding it impossible to move on he became increasingly porky and coked to the gills, lost in the depths of paranoia, despairing at his own inability to transcend the genre that had so defined him. By then, like all the other glam acolytes he had lost me too as I turned away for darker, more thrilling kicks Bolan somehow too frivolous and one dimensional. Of course, in reality I had just outgrown him. Through the very nature of the phenomenon, all pop stars fade away yet Bolan struggled to understand that that simple concept also applied to him.

Bizarrely, in the last years of his life, he was almost saved by television, initially via Mike Mansfield’s infamous Supersonic, and then through his very own kiddiepop show Marc. Following the release of Dandy in the Underworld, his best album since The Slider, he stirred himself enough to seize the moment one last time. Watching him was still mesmerising. On the one hand it all seemed horribly undignified but on the other it defined what had been so great about him in the first place, his ability simply to revel in the evanescent charisma of pop stardom.

Ironically, his old friend and nemesis David Bowie was his last guest. The two had barely started singing when Bolan tripped over a wire and toppled off the stage. Could there really have been a more painfully symbolic end to the Electric Warrior's career? He died just a week later, two weeks short of his thirtieth birthday convinced he would be nothing more than a footnote in pop history. It’s kind of nice to know that he needn’t have worried because for most every seventies teen he had already written his own chapter.