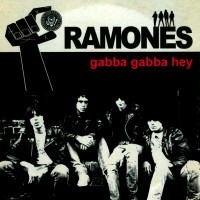 Forget all that stuff about punk starting in America, the tiresome myth perpetuated by Noo Yawkers desperately seeking their own smidgeon of reflected glory. The Sex Pistols, 1976 and all that had nothing to do with the hundred or so longhairs hanging around CBGB’s listening to groups who were already in their mid to late twenties. In London, Manchester, Liverpool, Edinburgh and the dreary satellite towns of the leafy southern shires and industrial northern wastelands, punk demanded total commitment and unmatched perseverance to a distinctly British cause in order to find your own voice and create your own possibilities. Unless you were The Clash, America was irrelevant.

Consequently, The Ramones debut was never going to be my own personal Damascene moment. Besides, that moment had already been and gone with the Pistols at the 100 Club by the time I got to hear it. Expecting more Rottenesque anarchy, I found Joey, Johnny, Dee Dee and Tommy’s ultra-fast, two minute barrages about nerds, The Texas Chainsaw Massacre, rent boys, sniffing glue and girls a tad disappointing. So completely different to anything I’d ever heard in my entire life, I just didn’t get it. And it wasn’t until they released the slightly more polished, cuter tunes of Leave Home eight months later that I did.

Influenced by semi-cool, almost laughable, lower league sixties acts like Chris Montez, The Troggs and Paul Revere rather than the established greats, I realised that by distilling those influences down to their basest elements, The Ramones were letting me in on their secret of what pop and rock really were, and how the trash aesthetic mattered just as much as The Shangri-La’s, who mattered just as much as The Stooges, and how they all mattered more than The Eagles or Fleetwood Mac or any of that stuff before punk and disco I continue to disguise as Secret Pleasures.

With the benefit of hindsight, I was also able to hear how their debut and ‘Blitzkrieg Bop’ in particular had influenced British punk simply by speeding it up. While the Pistols persisted with the trad rock pace of the past, The Ramones had provided a handy, high octane template for The Clash, The Damned, The Buzzcocks and younger punks like me who had no discernible musical ability but were determined to form a group and make our mark any way we could. So how was it, by the tail end of 1977, The Ramones had dropped off not only my radar but everyone else’s too.

The truth is that after two LP’s and a clutch of truly great singles their speedy, humorous take on society’s rejects had lost its appeal. Initially they may have come across as postmodern and ever so slightly disturbing but beyond the palpable shock of their early records, they could never be described as dangerous. And in 1977, danger was everything. In fact, by the time the Sex Pistols released ‘God Save The Queen’, a record that did quite a bit more than simply poke fun at teen boredom or revel in nerdiness, and ended up facing the wrath of the establishment, the media and the proles on the street, The Ramones had already been adopted as cuddly cartoon caricatures about as threatening as the Hair Bear Bunch.

They couldn’t possibly compete with the filth and the fury of a downtrodden Britain and neither did they want to. What they really wanted more than anything was stardom, particularly in their homeland, where they had been studiously ignored since 1974 when Dee Dee hollered ‘one chew tree faw’ for the first time in public. And yet, they continued to believe success was just around the corner if only they didn’t fuck with their own primitive formula.

Sadly, what The Ramones singularly failed to comprehend was that in the late seventies, their best singles; ‘Blitzkrieg Bop’, ‘I Remember You’, ‘Swallow My Pride’, ‘Sheena Is A Punk Rocker’, ‘Rockaway Beach’, were simply too strange for mainstream rock’n’roll radio. Ironically, the only time they entered into previously uncharted sonic territories on their Phil Spector produced version of his classic ‘Baby I Love You’, they scored a top ten UK hit. Predictably, in America it failed to chart at all yet astonishingly, despite an ever diminishing return of decent tunes and more and more reliance on covers, they continued on autopilot for a further fifteen years.

In the forty years since their debut, several generations of pinheads, brats, glue sniffers and cretins have connected with The Ramones in one way or another but these days, with Joey, Johnny, Dee Dee and Tommy in ramalama heaven, they are noticeably absent from the beamed in playlists of anyone much under fifty. If their remembered at all it’s merely as a fashion accessory on a branded shopping mall t-shirt. As for their music, even the hip kids don’t have a clue. They’d rather be listening to Foals or Alt-J or the constantly reforming Libertines. In the 21st century, unlike the other major figures from the punk era, The Ramones legacy is in real danger of being buried by time and dust. And that just wouldn’t be right. Gabba gabba hey!