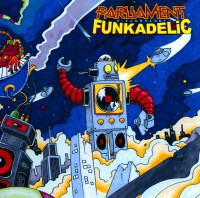 10 Funkadelic / Who Says A Funk Band Can’t Play Rock? / One Nation Under A Groove LP September 1978

As an eager young 70’s teen, to me funk always seemed such a wildly intoxicating beasty. The funny thing is I didn’t really know exactly what it was until I heard George Clinton’s Funkadelic and Parliament. Under his guiding hand, these twin freak flag collectives were the first to establish funk as the heir apparent to a new soul consciousness that had emerged from the wreckage of the 60’s. James Brown may well have been funk’s founding father but Clinton was most definitely its chief architect and tactician.

It was my mate Gary who introduced me to all the P-Funk records just as he did with Stevie Wonder. For an unimposing white boy who more or less merged into the background, its weird to think that within the microcosm of our mid 70’s world he was the only one flying the flag for cool black music. Cosmic Slop, Let’s Take It To The Stage, Mothership Connection, The Clones of Dr. Funkenstein, I loved them all because they were so different, not only to greasy 70’s rock but also to the run of the mill soul men of the day.

What’s truly remarkable is how Clinton managed to split his personality into two schizoid parts. Despite using essentially the same musicians there were a couple of major differences between Parliaments horn based grooves and Funkadelic’s more rocky, guitar based jams. Of course both were built on Clinton’s foundations of funk, his ultimate goal and supernatural driving force to make this new religion as legitimate as rock and roll.

While the early albums built a cult audience, it was the incendiary live shows that would attract the most attention. More like exotic space creatures than earthbound muso’s it is one of my few regrets that I never did get to see the P-Funk extravaganza in all its glory; Clinton in his crazy stage gear leaping out of the infamous stage re-creation of the mothership; the musicians running around in nappies, smoking dope and simulating sex acts. It must have been impossible to resist such a mind blowing spectacle especially as the world outside was being sucked into a vast monochrome vacuum of hate and misery.

By the mid 70’s, aided and abetted by ex James Brown bassist Bootsy Collins, Clinton was boldly taking his art way out where no man had gone before. A true pioneer, he frequently resorted to symbolic concept albums about the darker side of life, using his laser sharp sociological wit to highlight society’s injustices and how a community of like minded souls could liberate themselves from its constrictions. Over a run of Parliament albums from Mothership Connection to Glooryhallastoopid he animated this moral conflict with an increasingly fantastical sci-fi reality. What’s more, Funkadelic were even more prolific, eventually hitting their creative peak on One Nation Under a Groove, an acknowledged classic largely because of a rousing title track that would become an anthem of union and community.

The best of the bunch as far as my little lot were concerned was 1975’s much less revered Let’s Take It To The Stage. Fortunately it arrived right at the moment we had become bored out of our tiny minds with most everything rock’n’roll had to offer. Like most bored young Blighty boys, from then on in we became so distracted by punk and the resulting Diaspora that there was simply no room for mental afro funkateers of any sort. In such a rapidly changing musical landscape it was no surprise when Clinton and his ever revolving legion of sidekicks got left behind.

Ironically, just a few years after they had slipped into oblivion Parliament, Funkadelic and their constituent parts were resurrected by the new hip hop generation, their records recycled as ready made samples to be turned and twisted into invigorating new shapes and sounds. And even though it had taken a while, less than a decade later George Clinton was finally recognised as the black music innovator and visionary he had always been, every bit as vital as James Brown or Sly Stone. Elevated from under appreciated cult figure to legendary icon, he finally got the kudos he so rightfully deserved.