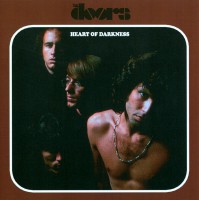 Jim Morrison said it best, ‘All the children are insane’. We are children revolted by the banality of what people think is sane. When Jim rambled profoundly: ‘The most important kind of freedom is to be what you really are. You trade in your reality for a role. You trade in your sense for an act. You give up your ability to feel, and in exchange, put on a mask. There can't be any large scale revolution until there's a personal revolution’, he knew then what we are choking on now. You can't change the world without changing yourself, and if you try, you just end up destroying it.

My introduction to this world was a dog eared, second hand copy of the Weird Scenes Inside The Goldmine compilation in my 4th year at secondary school. It made me realise that rock’n’roll didn’t have to mean hollow hard rock posturing or insipid prog doodles, but it also planted the seed of reactionary fervor, the idea of wanting to be different, to defy what was expected. But more than anything, more than any author or poet, Jim Morrison and ‘The End’ in particular made me want to write. I read it aloud as a poem in front of my English class and it was as awe-inspiring then as it is now. Of course a few years later it became intrinsically linked with the mystical opening sequence of Coppola’s Apocalypse Now, a film portraying Vietnam as a locus to which America had removed all its 60’s nightmares.

What people fail to realise now about The Doors and Jim Morrison is just how unhip they were in the beginning. Then again, The Doors never fitted in. The poetic, artistic ambitions of their debut album and Strange Days opposed the pop cool of the day by registering the lurking malevolence encroaching on the good vibrations. And yet, no sooner had The Doors defined their time than they strayed into pretentiousness, Waiting For The Sun and The Soft Parade being both ridiculously self important and grandiose.

As the decade reached its near apocalyptic finale with the assassinations of Bobby Kennedy and Martin Luther King, the increasing death toll in Vietnam, the rise of overt racism and the double whammy of Altamont and Manson, The Doors rapid fall from grace transformed Jim Morrison from all conquering sex God to slobbering alcoholic in an alarmingly short space of time. Somehow he managed to pull himself together enough to record the masterful Morrison Hotel and LA Woman but the writing was on the wall and he knew it.

In the decades that have followed it’s surprising just how much The Doors have been overlooked in the great history of rock. I can only think it’s because of Jim Morrison’s death in Paris just a few months after the release of LA Woman. The shock horror sensation of his mysterious end appears to have overshadowed his groups recorded works ever since and continues to do so. Me, I will never forget the effect he had on my 14 year old self, bewitched by his words and his imagery before I ever knew anything about either his life let or his death. He was one of my earliest influences and gave me that all important first lesson in swimming against the tide. I couldn’t ask for anymore than that.