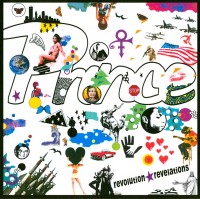 10 Another Lonely Christmas / Single B Side November 1984

One of my greatest regrets is that Prince completely passed me by until ‘Sign O The Times’, the only R&B single to address the hopelessness and spiritual desolation of the Reagan years. So while he is widely remembered as one of the titans of 80’s pop, his commercial high being Purple Rain - the single, the album, the movie - I remained stupidly ignorant. Even now I don’t quite know how that happened. Perhaps my ears were still stuck in indie mode but its safe to say that from thereon in I never missed a beat. Ironically, from Purple Rain on, many believe that Prince stumbled as often as he soared and no-one was much inclined to give this aloof, fruity genius an easy ride. Rarely and then reluctantly courting audiences he seemed to believe that sales and acclaim were inevitable given his talent and perseverance alone.

The one thing Prince has always been is productive. Since his 1978 debut For You there have only been seven years without a new Prince album, and that’s not counting the lorry load of bootlegs loaded with unreleased songs and live performances. At his peak he was so prolific he was even consigning potential hits to B Sides or gifting them to the likes of The Bangles and Sinead O Connor. Nor did he ever repeat himself. While his first two albums were mediocre exercises in funk and disco, he proceeded to forge his own pop language, utilising anything that took his fancy; from jazz to house to new wave to psychedelia to strange odd genres only he knew about. In his glorious, wondrous pomp the usual rules simply did not apply.

Naturally there were times when Prince was forced to concede that they did, yet those moments were few and far between and when his gambles paid off, everyone basked in the glory. After all, who else would have backed avant-garde Freudian funk before ‘When Doves Cry’? And who else would have sacked their entire band before constructing Sign O The Times, in many ways black music’s answer to The White Album? And who else could have turned Sheena Easton into a fuckable glamour puss? The hits of course remain peculiar enough but once past them there’s a whole mass of revolutionary, out there ideas and weird experimentation; songs that don’t go where their supposed to; basslines that vanish without reason; Princes voice warping into a new persona; sleaze mixing it up with spirituality; sincerity battling it out with gimpoid humour.

In the 90’s when Prince became the artist formerly known as, a time when his paranoia and bullshit were at a peak, his creativity didn’t so much desert him as overwhelm him. There were still fantastic moments on every release but it was hard work digging them all up. And yet while his magnificent catalogue has no sound that could in anyway be called consistent, it always retains one overriding philosophy, namely Princes maddening, crazy, intoxicating self belief.