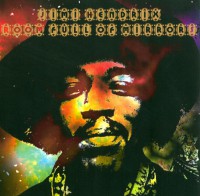 6 Manic Depression (Are You Experienced? May 1967)

Jimi Hendrix is one of those extraordinary touchstones we all go to eventually whether we want to or not. The common denominator in most every style of music incredibly, he continues to be portrayed as the loud, psychedelic rock star who used to set fire to his guitar.

When I think of Hendrix, I don’t think of any of that. I think of some of the most delicate guitar sounds ever recorded; ‘One Rainy Wish’, ‘Castles Made Of Sand’ or the painfully short and beautiful ‘Little Wing’. Like loved one’s coming back from the dead they hang around for a few minutes and then disappear again. Hendrix had a secret, unique relationship with his left hand, upside down, right handed guitar and though it was incredibly technical and based in theory, it was his theory and his alone.

I found him in the mid 80’s when Billy Duffy and Andrew Eldrich began referencing his albums for the first time, just before The Cult and The Sisters went rock. Before that he’d been strictly off limits, rejected for being too trippy, too flamboyantly virtuoso. After post punks uptight, hyper-rational concepts it was liberating to hear music rooted in such mystic awe and blissed out surrender. Finding Hendrix was a revelation and a thrill, the forbidden fruit of another time. I can still recall the thrill of hearing all those classics; ‘Hey Joe’, ‘Purple Haze’, ‘Watchtower’, ‘Voodoo Chile’ before graduating to Electric Ladyland with its vast scope and underlying menace he was too honest to hide.

Of course, preceeding both Janis Joplin and Jim Morrison, Jimi Hendrix was the first of rocks holy triumvirate to be subjected to the cool and allure of the tragic star figure. Don’t we all wish we were genius enough to die at 27, although maybe choking on our own puke isn’t quite so appealing?

There's certainly something heroic about the whole sorry story but the human element is always forgotten. Everybody is so wrapped up in his magic and otherworldliness, the myth and legend that was Jimi Hendrix that they forget he was a normal bloke who had a Social Security number and a shit just like the rest of us.

To this day, the quick buck merchants and the high street fashion chains put his face on T-shirt’s and to most people that's all he is, just another image like all those other dead icons. When I listen to his records, I just hear the man at his most ethereal and mind numbing and wonder at how another human being was able to create such magic.