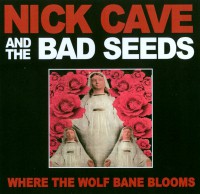 Now a fifty something beacon for arty, ex post punkers, Nicholas Edward Cave has happily channeled a dozen different versions of the male psyche over the past 30 years. A highbrow front man who just happens to write novels and soundtracks, in his Australian homeland he is part of the mainstream while in Britain and America he remains something of a major cult hero. With his tailored suits, gold rings, and bad hombre moustache, he has become our most well dressed oddball, a modern day outlaw for those who can’t or won’t get up before sundown.

For a while back in the eighties, it looked as though Ol’ Nick would become a darker, underground Vegas Elvis. The Bad Seeds, his merry band of musical mercenaries were once so suave and sure they were able to walk the line between boy horror and human truth at will as their master conjured tales to tell, metaphors to make and black humour to deliver, all based on the cinematic image of a stick thin preacher man in a Godforsaken swamp bound American town where hard-nosed women pushed crazy men to murder while the local congregation sang ironic chorus’s of ‘Jesus Wants You For A Sunbeam’. At his best Nick Cave made any ritual seem both unnatural and redemptive.

It couldn’t and didn’t last. As fascinating as all those American gothic scenarios were, like all of us, as age expanded his experience and horizons, the more his attention wandered. The killing spree ended magnificently on Murder Ballads, a masterpiece of death and destruction bearing not the slightest trace of irony or moral high ground, our hero crushing sweet Kylies head in with a rock on his one hit single. And that was about as lightweight as it got.

The Boatman’s Call his tenth album in thirteen lucky years was an indication the times were a changin’. The melodies were lighter, commercial even, but still without compromise. A set of acoustic ruminations dominated by the spiritual aura of gospel, it was the first major step on a road that would lead to albums set in the mould of classic songwriting, the music’s sense of rolling calm belying a man trying to make sense of his own inner turmoil and continuing heroin habit, a legacy of his youthful suicidal wildness.

There were one or two people I once knew, unlikely people at that, who kept their Nick Cave records close, believing them to contain all that is true about life and love like some magic elixir, the music, made from ancient folk song, hymn and grim self deprecating humour soothing while it agonised. As with Radiohead, Spiritualized, Bjork, Sigur Ros and the like, Nick Cave exists so far beyond modern pop culture that to explain has always been pointless. You really just have to hear his records and more than once too because they sure ain’t an easy ride, and no matter how much of an alien concept it may be these days, they will require a bit of effort to unlock the beauty hidden within.