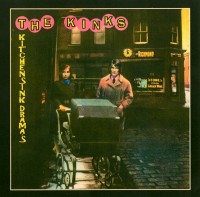 9. Where Have All The Good Times Gone / The Kinks Kontroversy LP November 1965

While this may well be heresy, once upon a time I thought The Kinks were just another one of those sixties groups held up as genius Gods. And yet the more I got to know them the more I realised just how out of step and unique they really were. Even in the midst of those halcyon days, Ray Davies was writing wistfully of his idyllic fifties childhood in weird old Albion; of bowler hatted city gents, the magic of steam, everlasting summers, beautiful sunsets and dancing at the Palais. Rather than submerging himself in the prevalent psychedelic freakiness, he chose to go his own way. While everyone was writing song cycles of Far Eastern mysticism, he was writing about a two up two down on the edge of suburbia. He invented his own world and gave it life and in that world, no-one was wearing flowers in their hair, smoking dope or zonking out in a Technicolor 24 hour dream coat. Arguably, the finest example of that imagination was the Village Green Preservation Society LP despite being more Railway Children than kitchen sink drama.

In the early eighties an Australian Kinks nut of my acquaintance visited the old country to experience for himself Davies childhood ‘village’ of Muswell Hill; the gorgeous vistas, the thwack of bat on ball, real ale and the ducks quacking on the pond like an opening scene from Trumpton. Of course, what he got was grimy reality and although we laughed about it after, I could tell he felt cheated. What he’d missed, like so many others, was the album was never intended as a realistic portrayal of sixties Blighty but more of an appeal to preserve all those wonderful sentimental objects, experiences, and fictional characters from the inevitable march of progress and modern indifference. As the man himself sang; "God save little shops, china cups, and virginity". Genius?

As great as albums like Village Green, Face to Face and Something Else were, more often than not they were spectacular commercial failures hardly befitting a group who had once been mainstays of the British charts. The Kinks had become a critics group, the fantastic ‘Lola’ and not so fantastic ‘Apeman’ successful blips in an otherwise bereft seventies. Incredibly they kept at it for another 20 years or so producing a complicated litany of rock operas and stage shows soundtracks. For a while they even became bonafide American rock Gods. Over here they had already been consigned to the past.

So, unlike The Who or The Stones who smashed their way in through the front, The Kinks had to creep into rock history through the back door. With a little help from Britpop, for whom he was a slightly crumbly grandfather figure, Ray Davies is now a very well respected man indeed, albeit a shy, insecure, old fashioned one. The only songwriter of his time to consistently document such a peculiarly English life, I reckon he deserves every accolade he can get.