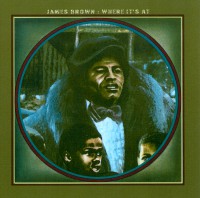 I have only ever danced to two records my entire life and that was just a couple of times. Yeah, I’ve tapped my foot and even swayed about a bit, but I’ve only ever truly got off on Stevie Wonder’s ‘Superstition’ and James Brown’s ‘Get Up Offa That Thing’. The first time was such a momentous occasion I even know where and when; all punked up, speeding out of my head in the Summer of 76’ at The Calcot Hotel where, most surprisingly, ‘The Management’ didn’t seem to object to our lack of flares, moustaches and footballer perms.

That was when I first realised the awesome power of James Brown. The bringer of wisdom to his beleaguered black American audience in the 60’s and 70’s, he always epitomized what could be achieved. On record he was Godlike, summoning up songs at will, as charmed, intrigued and mystified by his own ability as the members of his ensemble and audience.

His influence had started early on as he used his sheer force of personality to smash a way into the public consciousness and push soul in a new direction towards the mainstream. Revered as ‘Soul Brother No 1’, even amongst his peers, he released a string of tougher than tough dance records, before blowing everything apart with ‘Cold Sweat’. That record was so radical, so different, it single handedly detonated the seismic shift towards funk, and in so doing changed the course of history. Without doubt he was the most assertively black personality ever accorded mainstream acceptance in America.

Even more Godlike was his ability to not only influence greats such as Sly Stone, Miles Davis and George Clinton, but in turn to be influenced by them. It was the confidence of the truly great. As T.S. Eliot pointed out ‘The talented borrow but the genius steals.’ At the height of his powers James Brown was so sure of himself he often didn’t even need to play or sing on his own records so confident was he in the knowledge that the musicians laying down the music were all his own choice.

In new times and in a constant quest for change he started to economise and refine funk still further, the tiniest grunt or ‘Good God’ meaning everything. The sound slimmed down and down until it streamlined into pure rush grooves like ‘I Got the Feelin’, ‘Mother Popcorn’, ‘Funky Drummer’ and the amazing ‘Brother Rapp’. Then, the mind blowing austerity of “Ain’t It Funky” made his previous singles sound as leaden as hard rock.

In the 70’s, his hard work policy grew and grew until it was out of all proportion. Although there was a smattering of fundamental funk there was also a disproportionate amount of soul ballad type stuff. While there were undoubtedly some great grooves, the sheer quantity of his output had started to undermine the groove itself.

It was obvious his day had gone but it was equally obvious his legacy was already secure. He certainly did things along the way where you can't help wondering, ‘What the fuck’, but the good stuff always comes from those one of a kind people. Those people are touched by God. They are special and James Brown was one of them.