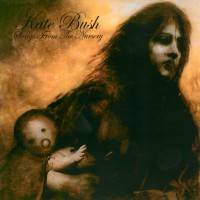 1 WUTHERING HEIGHTS Single A Side January 1978

3 THE SAXOPHONE SONG The Kick Inside February 1978

5 THEM HEAVY PEOPLE The Kick Inside February 1978

6 THE KICK INSIDE The Kick Inside February 1978

7 HAMMER HORROR Single A Side November 1978

14 THE INFANT KISS Never For Ever September 1980

15 ARMY DREAMERS Never For Ever September 1980

16 DECEMBER WILL BE MAGIC AGAIN Single A Side November 1980

18 SUSPENDED IN GAFFA Never For Ever September 1980

3 AND DREAM OF SHEEP Hounds Of Love September 1985

5 EXPERIMENT IV Single A Side November 1986

6 THE SENSUAL WORLD Single A Side September 1989

11 RUBBERBAND GIRL Single A Side December 1993

14 KING OF THE MOUNTAIN Single A Side October 2005

When I first encountered the 19-year-old Kate Bush in 1978, my mind was still reeling from the sound of fury and revolution. Wrapped in little more than a skintight leotard and an anguished expression, she was wailing about her Heathcliff, like the Bronte sisters on acid. Infact, her character was so sharply drawn that she became a household name almost instantly. But then, she was hardly your average teen popette.

Kate Bush was only a child when she first wafted into the spotlight, a callow teen with dreams of art and stardust, who had already written ‘The Man With The Child In His Eyes’, at just 13. From the start her songs explored the less illuminated darker corners of life: lust, menstruation, pedophiliac desire, incestuous relationships, and a post nuclear apocalypse anthem sung by a foetus. Middle class Mum’s buying that nice girl Kate’s albums for their young daughters would have found, if they’d listened a little closer, that she wasn’t quite as nice as she seemed.

It was on her third album, Never For Ever that she morphed from being essentially an imaginative but traditional singer songwriter, into a far more interesting and ambitious performer with few clear musical precedents. Forever after, she would frequently be cited as an influence on successive generations of artists, not all of them female. That was partly due to her drawing inspiration from other media rather than music, interpolating the works of JM Barrie, Joyce, Tennyson, Stanley Kubrick and Powell & Pressburger into her own. Hounds Of Love remains her masterpiece, described by John Lydon as “beyond an album – an opera” and it was only with the less cutting edge, too ‘rock’, The Red Shoes that her halo slipped ever so slightly. Indeed, as she grew quieter following its release, it seemed as if she had finally run out of creative steam, retreating into obsessive domestic seclusion in her Berkshire and South Devon mansions. She even had a son, Bertie, who made it to 18 months before the outside world even knew of his existence.

Eventually there was to be a yawning chasm of 12 years separating The Red Shoes from 2005’s Aerial, which not surprisingly featured a core of domestic contentment, heard most impressively on the washing machine ballet, ‘Mrs Bartolozzi’. It’s a marvelous, complex work that looks afresh at her enduring interest in childhood, and the struggle not to relinquish it. Having turned 50 in 2008, she has retained the inquisitive spirit of youth, while maturing into something far more multi-dimensional: not just the most gifted and intriguing female pop star Britain has ever produced, but one of the greatest British artists of all. Shine on you crazy Hotpoint diamond!