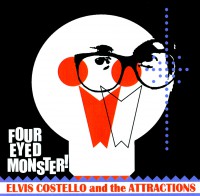 9. Watching The Detectives (Single A Side October 1977)

Starting out as a punky pop four eyed geek, a mutant hybrid of Buddy Holly and Joe Strummer putting the world to rights, Elvis Costello’s first records were fantastic. He had the seething contempt of punk but with an intelligence and melodic sense that in 1977 was a rarity. While punks didn’t give a fuck, he was sensitive enough to not only give a fuck but to be pissed off and disturbed by that fuck.

He didn’t fit in and he knew it but soon found a far more natural home in New wave. Hooking up with The Attractions in all their poptastic glory made his life much easier, particularly with his ability to knock out scathing classics like ‘Watching The Detectives’, ‘(I Don’t Want To Go To) Chelsea’ and ‘Oliver’s Army’. But Elvis Costello was never one for sticking with any one image for too long so with that in mind, following the triumph of Armed Forces, he slyly began to reinvent himself.

Initially there were the confusing ‘genre’ exercises; the cut price but admittedly great soul of Get Happy; the horrendous Nashville homage of Almost Blue and the confusing, Sergeant Pepper mimicking Imperial Bedroom. By this time the man’s schizoid, clever clever tendencies had really started to grate. In the mid eighties he even made futile attempts to change his identity. Kicking off with the ‘Pills & Soap’ single, he billed himself as The Imposter before reverting back to his real name of Declan McManus on King Of America, Napoleon Dynamite on Blood And Chocolate and finally The Beloved Entertainer on Spike.

Those last few albums of the eighties also witnessed a definite downturn in his abilities. Full of the usual wit and detail but lacking in an awful lot more; memorable melodies for sure, focus possibly, and the old intensity definitely. And even though that’s where I left him, his nineties were no better as he became all grown up with long hair and a beard, dismissing contemporary pop in favour of classical music while romancing crumbly, irrelevant icons like Neil Young, La La McCartney, Tom Waits, Roy Orbison and Johnny Cash. For the first time it was possible to completely count him out as a relevant talent and he’s never come close to a return.

On occasion I have thought that maybe I got it wrong and that Elvis Costello’s restlessness and constant yearning to move on were something to be admired. After all, he could claim quite rightly that he’s never made a dishonest record and not many have done that. But I have always sensed the ghost of his father, fifties bandleader Ross McManus, shadowing his every move, urging him on, to gain the respect of his peers, to make him proud.  I can think of no other reason for his numerous collaborations and brown nosing. Of course, the downside to all that is the original 1977 angry young man is now a boring, sycophantic old fart. I can’t help wondering what his 22 year old self would have made of it all.