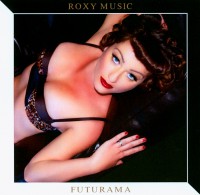 It’s impossible now to understand how fantastical Roxy Music looked and sounded in 1973. Greasy rock was a drab, denim clad business largely unknown to me yet even when compared to Marc Bolan’s teen anthems Roxy were so obviously different. All it took to get me hooked was that hanging chord intro to ‘Pyjamarama’ before For Your Pleasure became the first LP I ever bought, a landmark moment I literally couldn’t afford to get wrong. I needn’t have worried. As soon as ‘Do The Strand’ exploded out of the speakers Roxy instantly became another significant marker on my path to musical nirvana.

Part of the reason why such an obviously flash, insincere, elitist group found such a willing audience amongst the glam kids was because they looked and sounded like a 1950’s version of the future. They never had that false pretence of authenticity so had no false promises to sell out, no lies to live up to. From the beginning they were an art student theory about rock and pop, unashamedly post-modern and as Ferry himself sang ‘A danceable solution to teenage revolution’.

With or without Eno’s much lauded experimental bent it was obvious that Roxy Music were Bryan Ferry's baby. It was he who had formed them and he who had formulated the concept they would never stray from. Ironically, it was Eno’s departure after For Your Pleasure that forced Ferry to become even more focused and energised. While Eno had helped mutate the songs into the eerie collages and synthscapes that had given the group their early identity, it was the albums they recorded without him; Stranded, Country Life and Siren that demonstrated how muscular, vicious and giddy they really could be.

It was on those records that Ferry truly found his voice. Just as importantly, that was also where Andy Mackay, Phil Manzanera and Paul Thompson found their own freedom to roam. When they hit full throttle on songs like ‘Street Life’, ‘Mother of Pearl’, ‘All I Want Is You’ and ‘Both Ends Burning’, it was some of the most thrilling music they ever created.

The feeling that pervaded almost everything Roxy Music did, and what I found so fascinating about them even if I didn’t fully understand it at the time, was one of romantic gloom and the exhaustion of hedonism, themes that will be pop relevant as long as self-conscious twentysomethings want to be famous. Whenever Ferry glided through his songs as if they were parties he'd forgotten to go to, those themes haunted his every word. When he departed for a solo career after Siren, I thought they were lost forever.

Of course, then he went and almost ruined it. Three years later he reformed Roxy for a trio of albums to explore that weary restlessness in ever prettier, more laconic ways. There had already been a noticeable yet natural smoothing out on Country Life and Siren but by the time of Manifesto and Flesh + Blood that subtle change was in full swing, Ferry cleverly playing the game of pop according to the rules of a brand new post punk era. I was far too absorbed in doing my own thing to care but no matter how much I resisted, my old loyalty kept dragging me back to them and I’m glad it did. Even I couldn’t deny the grace of ‘Oh Yeah’ and ‘Over You’ or the shimmer and shine of ‘Same Old Scene’.

Sure there were moments when this new incarnation stopped sounding tired and started to sound bored but there were also moments like Avalon's ‘More Than This’ and ‘To Turn You On’, where the smooth studio sheen cracked just enough to let the heart breaking loneliness seep through. Then they were gone again, this time for good, ‘Avalon’ itself delivering the final message; ‘Now the party's over, I'm so tired’.

In both their early and late periods Bryan Ferry and Roxy Music dared to ask the question, can music really be so anti rebellion, so insincere and inauthentic that it can break on through to become the very grain of life? The only answer I can ever give is yes. When I was thirteen I knew Bryan Ferry was telling me something vital and forbidden about the adult world. Not knowing what it was merely increased the mystery and so I continued to play the records over and over, safe in the knowledge that I had already found a lifelong pop love unlike any other. Incredibly, over three decades later that mystery is still there, still undiscovered and that’s what keeps me playing those songs. If that doesn’t make Roxy Music special, I don’t know what does!