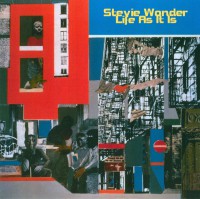 I think we all know that Stevie Wonder is hugely overrated. Of course, I get it that he’s a legend, that’s indisputable, but I’m sure that has less to do with his music and far more to do with his status as a reverend icon, a minister of love and happiness in our crazy, fucked up world. And for once I feel qualified to write such a thing because strange as it now seems, Stevie Wonder was as much a soundtrack to my teenage years as some of my more predictable favourites.

In the mid seventies, within our youthful clique of strays and stragglers, while we all shared roughly the same likes and dislikes, individually we tended to fixate on one group or artist above all others, whether it was Rod Stewart, Roxy Music, Mott The Hoople, Cockney Rebel or Led Zep. Then, along came Gary, a bit of a latecomer. His specialist subject was Stevie Wonder.

Being largely white boy rockers, Gary’s liking for the wondrous one was the source of much amusement and confusion to us Neanderthals. While we swapped LP’s during our weekly ritual, he would always stand to one side, bemoaning the fact that no-one ever wanted to borrow his coveted Stevie vinyl. Now, as luck would have it Gary lived close to town so we often crashed at his house come the weekend. And that was where he would gleefully wreak his revenge, playing nothing but Innervisions, Talking Book, Fulfillingness First Finale or Songs In The Key Of Life last thing at night and first thing in the morning, over and over until we slipped into unconsciousness or could stand it no longer and left.

Not surprisingly, I became very familiar with those albums, and yet no matter how many times I heard them, they were never an easy listen. Apart from the obvious chart hits, they were full of mystifying subtleties and nuances that made them bloody hard work, certainly for me. Gary though would sit there in beautific silence, totally immersed in wonderland and the supposed magic unfolding around him, and it had nothing to do with any drink or drugs either.

When I finally got around to this playlist, naturally I couldn’t help but think of Gary, where did he go, what happened to him, does he still listen to Stevie Wonder every night driving his Mrs and kids insane. Initially, I guess in his honour, I intended Life As It Is to be an alternative best of without any of the hits. But the more I listened, the more I realised that the popular songs were often the best songs and a necessary interlude amongst some of the unknown, harder biting, and more intriguing album tracks. Because even now Stevie Wonder still takes a bit of effort to like. Infact, it’s only since I’ve hit middle age that I’ve been able to appreciate him at all, something that would have been impossible in the past because his songs are hardly the music of youth are they?

One of the reasons could be that the man is always so goddamn happy, and I mean really happy, not just faking it. As we know, youth and happiness don’t really mix well together. His songs may well be angry and socially biting, sad and melancholic, but they are rarely depressing in an angst ridden, rebellious, slash your wrists kind of way. And how could any self respecting youth ever forgive him for those horrible syrupy eighties ballads that old gits sing to each other at weddings. Still, no matter, it’s hard not to like the man with all his cheeriness, graceful introspection and deep rooted spirituality. He certainly makes a change from the troubled souls I usually listen to.