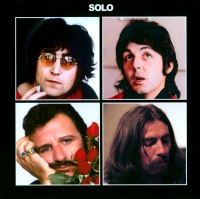 1. George Harrison / Give Me Love / Living In The Material World LP June 1973

It’s at times like this that I feel more like a museum curator than a music fan. I’ve always had about as much interest in The Beatles as I have in those dirge spewing musical chimps Oasis so picking over the bones of Messrs Lennon, McCartney, Harrison and Starr is more like an archaeological dig than a pleasurable listening experience. I can’t deny that I’ve always found the ex-Beatles solo years fascinating. It’s just that it’s never had much to do with the music.

You see, I can remember the 70’s in all their grubby glory. Right up to punk, the ever present ghost haunting the machine was always the fucking Beatles and their holier than thou reputation. Admittedly, the state of the times didn’t help. In the early years most folks were in denial that the 60’s were even over, the not so Fab Fours split generating a period of mourning more akin to the death of Kennedy than a pop group. While Rod Stewart, Elton John, Led Zeppelin and Deep Purple pointed the way to a future of ridiculous excess they were always going to be poor replacements for a worldwide phenomenon that had been modern culture’s only focus for seven long years.

Thankfully, as I began to immerse myself in pop’s rich tapestry I was blissfully unaware of all this, my Beatles knowledge limited to the handful of kiddie tunes we all sang at school.

Surprisingly, the first to cross my path were the two unlikely lads and it was Ringo who made the most impression on his glam band wagon hits ‘It Don’t Come Easy’ and ‘Back Off Boogaloo’. To an 11 year old they were the dog’s bollocks, absolutely brilliant for jumping around to at the youth club disco. Back then I thought he was tops and when he hooked up with Marc Bolan for Born To Boogie and then took a role in That’ll Be The Day I liked him even more. His skill as a drummer was never even mentioned.

Obviously, George Harrison looked far too much like Jesus to ever be tops even if ‘My Sweet Lord’ did sound suitably mystical and alluring. It came from his magnum opus, the triple LP All Things Must Pass which was packed with songs he’d clearly been stockpiling for years. It’s worrying to think that if that release hadn’t been quite so expensive, and hadn’t contained that off putting third record of typically 70’s muso jamming, I may well have ended up buying it as my first LP. I shudder to think how different my musical genesis could have been if I had.

Unfortunately, All Things Must Pass was the last decent record George had in him, his stock of the good stuff exhausted by the time of Living In The Material World three years later, ‘Give Me Love’, yet another hymn to his God, the only good thing on it. Enamoured with expensive cars, weeding the gardens of his 120 room neo gothic Henley mansion and living the life of an exceedingly rich man, he gradually lost interest in music, although he continued releasing the odd useless album every couple of years, presumably to raise a few more quid.

Of course, in truth no-one really cared about Ringo and George’s exploits. From the second they split up the one ex-Beatle everyone put their faith in was John Lennon; Lennon the rebel, Lennon the wise, Lennon the voice of the people. All on his own he was going to lead them to salvation. That must have been far too deep for my innocent pre-teen mind as I didn’t catch up with him until Mind Games but when I did, I couldn’t understand what all the fuss was about.

To my own credit I didn’t leave it there. I investigated further by borrowing The Plastic Ono Band and Imagine albums but still found them disappointingly whiny. While there was no denying the greatness of ‘Working Class Hero’, ‘God’ and ‘Gimme The Truth’ Lennon’s head was still stuck firmly up his own arse. And yet while those records sounded completely out of sync with the real world, none were more self obsessed than Double Fantasy, the album fate would deem to be his last. Revolutionary it most certainly was not. Then again, I reckon Lennon was always a bit of a con on that front.

Apart from his dodgy 1972 single ‘Give Ireland Back To The Irish’, Paul McCartney has never been the slightest bit radical. In fact, as soon as the Beatles split, he became one of the most reviled men in pop by daring to settle for a life of cosy domesticity on his Sussex farm. His path was not really any different to that taken by his former song writing partner but whereas Lennon’s move was viewed as a militant stand against The Man, McCartney’s, much like his music, was seen as conformist and boring.

As he retreated into a world of babies and ballads, his LP’s became more and more like unedited home movies, filled with dreary paeans to the wonder of love and family. With a natural penchant for whimsy and olde tyme tradition, they were exactly the kind of records my Dad thought were quite nice. Actually, it’s kind of scary to think that I heard more McCartney records in the 70’s than those of the other three put together. Not only that, I heard them so often I even found myself liking the odd tune, particularly ‘Jet’, the most un-Beatles like song by an ex-Beatle ever.

Certainly I knew more of Paul McCartney’s catalogue than was good for me but while I’d always had the odd fleeting moment of affection for Ringo, George and Lennon, I still found him impossible to like. Sure the odd tune was OK but there’s no denying he was also responsible for some of the most horrendous songs known to modern man. He also came across as a bit of an ego maniac. Otherwise why after Lennon’s murder did I get the feeling he was ever so slightly relieved that his great rival was finally out of the way?

Anyway, there you have it; a decade or so of records by four individuals who could never quite reclaim their identities from the myth of The Beatles. All a bit trite and not very important, it could be argued that if they hadn’t been by ex Beatles most would have been dismissed out of hand. But then, unless you have some kind of weird religious devotion to all things Beatles, I guess you already know that. I’m just happy I’ve finally been able to exorcise their ghosts. I will not think of them again.