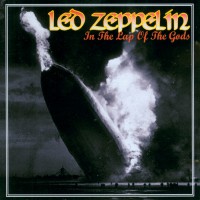 Even at the start of their careers, the approach of the worlds most famous and influential heavy rockers was identifiable and unique. Grasping the fearsome riffage of pioneers such as Cream and Hendrix, and updating it to a new, awe inspiring brand of rock, Led Zeppelin both advanced the musical boundaries and paid homage to their inspirations from the blues, folk and R&B. As the sixties drew to a close, a new order was being established amongst the rock elite and they were heading the pack.

Formed from the ashes of Jimmy Page’s previous band, The Yardbirds, and named by Who drummer Keith Moon, the guitarist recruited seasoned sessioneer John Paul Jones, raspy voiced Adonis Robert Plant and now legendary drummer John Bonham. Plant would always be perceived as the light to Page’s darkness, but his ribald sexuality played no small part in the bands early appeal. Infact, right from the off, Led Zeppelin were brilliant at understanding what rock’n’roll was and how far to push the envelopes of sexuality and flamboyance.

As soon as they started recording their self financed debut, and the riffs and grooves began to be thrown around to realize the epic music in Jimmy Page’s head, it was clear Led Zeppelin were far more than the sum of their parts. Absurdly young at the time (Page was 24, Jones 22, and Plant and Bonham each an exuberant 20), they began to forge the on the road legend deeply embedded in rocks rich tapestry. Drugs, groupies and wild kicks of every sort were the rule rather than the exception.

If Led Zeppelin I was very much a product of the late sixties British blues rock boom, Led Zeppelin II, arriving just seven months later in October1969, set the template for seventies heavy metal and in ‘Whole Lotta Love’ created the rock riff by which all others would be judged. Amidst all the lurid tales of excess, it’s often forgotten just how sonically adventurous Led Zeppelin were. And one thing they never did was rest on their laurels.

The predominantly acoustic Led Zeppelin III was proof enough that their aspirations went far deeper than any supposed invention of a new genre and was a keynote indicator of where they fitted into the bigger musical picture. When they re-emerged with their fourth album in November 1971 it was even more forward looking. The sleeve alone was loaded with intrigue featuring a framed picture bought by Robert Plant in a Reading junk shop while on the inner sleeve each band member was represented by a different runic symbol, Jimmy Page’s based on a 17th century magickal text. And the music was the most phenomenal yet, from the slow building ‘Stairway To Heaven’ to the narcotic, blues rock colossus of ‘When The Levee Breaks’: the most sampled drum sound of all time.

Having codified themselves as near mythical rock gods, Led Zeppelin went out of their way to be seen as such, the mystery deepening with limited press and TV exposure. In the seventies, only the live show delivered Led Zeppelin incarnate, so creating a further tantalising distance, and adding even more to the mystique. When they weren’t holding court in the skies aboard their own Boeing 720, dabbling in the occult, riding motorcycles in hotel corridors or enjoying the favours of America’s finest groupies, the band still maintained astonishing quality control. By March 1975, they had eclipsed all opposition, including the Stones, completed 10 North American tours and a run of studio albums that continued with the vaguely progressive Houses Of The Holy and genre hopping double Physical Graffiti; superb records with their own charms and idiosyncrasies that belied the notion of a band content with their lot.

Remarkable as their ascendancy had been, little more than a year after the April 1976 release of Presence, a less obvious, brutal rock record, everything began to turn black. A litany of misfortune, thuggery and escalating heroin use by Page, Bonham and manager Peter Grant in particular, plagued the subsequent tour. Page himself – rail thin, pinned eyeballs hidden behind aviator shades and modeling a decidedly punk SS cap and jackboots – looked like he’d just been flown in from the darkside. Mayhem followed the band everywhere and whispers began to circulate that they were in league with the devil, particularly when Robert Plant heard the news no man deserves to hear: his five year old son Karac had died suddenly of a viral infection. And the bad karma continued following the release of In Through The Out Door when John Bonham died in his sleep, the alcoholism that had plagued him for years finally catching up.  As a sign of respect for their friend, Page, Plant and Jones agreed that the future of the band had passed with him.

Perhaps Led Zeppelin were never destined to make it into the next decade, having so completely dominated the seventies. The Beatles, Rolling Stones and Hendrix had all been sixties icons, emotionally owned by those older than Led Zeppelins predominately teenage audience, a fan base eager to create its own heroes. Led Zeppelin were the essence of where rock’n’roll arrived at in the seventies: in terms of poetic lyrics, sexuality, technology and Jimmy Page’s reinvention of what now constitutes a guitar hero. They achieved everything they set out to do and still cast a shadow long after they ceased to exist.