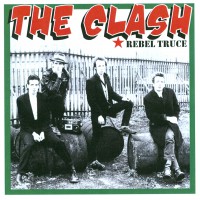 9 Complete Control / Single A Side September 1977

13 White Man In Hammersmith Palais / Single A Side June 1978

1 Rockers Galore / Single B Side with Mikey Dread August 1980

3 Something About England / Sandinista! December 1980

19 Straight To Hell [Unedited Version] / Single B Side September 1982

When Joe Strummer died of a heart attack on 22nd December 2002, his death made the front pages of all the top international rags, not least the New York Times. It was a fitting tribute to a man who was the closest I ever got to having a hero, but the attention was surprising. After all, nearly two decades had passed since The Clash fell apart.

They were one of the greatest bands of modern times and I followed them religiously for a good couple of years. They were a rallying point, a focus for all my frustration and confusion. I was at the Rainbow riot in May ’77 and Victoria Park Rock Against Racism bash in April ’78, but the best shows were in the provinces, places like Bristol, Bournemouth and Hastings. Walking through those towns was literally walking the line. Unlike the local part time punks, with our de rigueur spiked hair, tight jeans, leather jackets and brothel creepers we were always targets for the local cops, bozos and Ted’s. We got loads of shit every time. The Clash themselves would always cut through that crap, Joe Strummer all nervous energy, leg pumping, arm thrashing, commanding attention, a natural leader of men. It was the greatest rush, a feeling of ‘We can do anything’, a tangible sense of belonging.

Back then, I thought they would be remembered in all their confused and contradictory glory, for The Clash, the most life affirming, vital, relevant and contemporary record I‘d ever heard, the stenciled urban guerrilla look, the reggae influence, their early press interviews and those classic 1977-78 punk singles. After all, those were the days when The Clash said and did everything they subsequently failed to live up to and failed to live down. When they claimed they had come not only to shake up rock’n’roll but also to change the world and it still seemed perfectly possible for representatives of a youth culture to actually do that.

The Clash defined the early punk period so accurately that we all knew it would only be a matter of time before they planned an escape from its rigid constraints. That came when they made a move to conquer America, largely on the back of ‘I Fought The Law’, and as they waved their largely indifferent homeland bye bye, the dynamic changed completely. A different view emerged and it seemed as though they would be remembered solely for London Calling, Pennie Smith’s black and white photos, the New York Bonds residency and Don Letts videos for the Combat Rock singles. They were soaking up influences from every place they visited, both in real life and in their imaginations, and were on the cusp of truly making it big.

These days, those two views have merged and The Clash’s painstaking efforts to create their own myth have been eclipsed by the far more powerful force of nostalgia. When I think of The Clash now, I forget the embarrassing moments, the mistakes, the shit songs, the embarrassing publicity stunts, the unfulfilled promises. Instead, I’m left with all the best bits, their natty dress sense, the rockabilly haircuts, their cool as fuck influences, the best songs, the best shows, the most stirring videos and the warmest memories. Infact, I have constructed a near perfect rock’n’roll band, a Hollywood version of The Clash. They have left me with the soundtrack to their own movie, the one where The Clash are characters in some sepia tinted Western, gritty Vietnam war film or grainy made for TV youth drama…There they go, frozen in time, riding into the sunset, from reality to history and into legend.