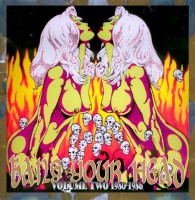 As Judas Priest, Motorhead, AC/DC and others ripped heavy metal from its hard rock roots, the punk revolution was destroying every olde worlde musical value in its path. Any crumb of industry support for metal evaporated but punk did renew Britain’s sense of musical identity and through its DIY ethic, inspired bands like Iron Maiden, Saxon, Def Leppard and Angel Witch to release their own records. As word spread, the new renaissance was clumsily titled the New Wave Of British Heavy Metal or the catchy NWOBHM for short. The established Judas Priest were appointed flag bearers and by 1981 the genre already had a short legacy working on its behalf. But there was to be no rest for the wicked!

In June 1981 the first issue of music weekly spin off Kerrang! appeared, instantly becoming the heavy metal bible. Its international export inspired floods of overseas bands like Germanys Accept and New York’s Riot. Ironically Twisted Sister were introduced to their own country through those very pages. Iron Maiden, the best of the new breed, seized their opportunity and fully realised the NWOBHM’s creative potential. New singer Bruce Dickinson’s recording debut Number Of The Beast proved a masterful, defining moment. Another was Black Metal by militant Geordie Satanists Venom. A complete future sub genre would eventually mutate from that one unholy racket.

Meanwhile America was still awakening from a disco nightmare and the ruins of punk. The heavy metal revolution slowly gestated, a few devout believers preaching the word of the NWOBHM. As they awaited bands of their own, an unlikely European alliance came from the burnt out Ozzy Osbourne. A Los Angeles resident since 1976, his new more melodic sound was powered entirely by American musicians. By 1983 heavy metal was being airlifted in, popularised by larger, more frequent tours. Fans whose idea of excitement was initially rearranged by AC/DC were blown apart by Judas Priest, Iron Maiden, Black Sabbath and other British invaders. Sabbath themselves had rejoined the fray with new front man Ronnie James Dio who reinvented their stately doom with grandiose concepts before launching a solo career.

However, small pockets of American resistance were starting to go overground, the most noticeable being the LA club scene headed by the punky, big haired Motley Crue, Ratt and WASP, spiritually guided by forerunners Hanoi Rocks from Finland. And yet this was just a minor glam diversion from what would be the real deal. As the 1980’s moved on America injected metal with its own style and approach. And then came Metallica.

James Hetfield and Lars Ullrich were both walking encyclopaedias of the NWOBHM, only they knew they could do it harder, faster and better. Their debut Kill ‘Em All expanded the boundaries while steeped deeply in heavy metals new legacy. A year later Ride The Lightning urged confrontational subject matter well beyond the usual escapism. To differentiate their approach, they tagged themselves ‘power metal’ and were joined by a youthful Anthrax, Megadeth, former Metallica guitarist Dave Mustaines stunning new band, and finally Slayer, who with a healthy satanic interest and deathly fast speed were a supreme early example of black metal. Together these were the ‘Big Four’ of new American metal, all rapidly transferring from independent to major labels in readiness for their eventual global domination.

As their influence increased new bands no longer emulated the soaring vocal styles of Iron Maiden or Judas Priest but rather a gruff Hetfield derived bark. The hallmarks of power metal were revealed as a transitional phase between classic heavy metal and something entirely new: thrash metal. With an all out fury, the bands were getting heavier; dress sense matching the new minimalism with costumed finery replaced by black leather and ripped denim.

Europe too had moved on. Scorpions originally put Germany on the map but after 1982’s supercharged Blackout they descended into power ballad sap. Accept replaced them and were soon followed by the Swiss based Celtic Frost and thrash experts Kreator. However, the true innovators were Denmark’s Mercyful Fate whose elaborate compositions even outclassed Metallica.

Despite these bands there was no disguising the impetus had finally crossed the ocean. It was in America that heavy metal would offer even more perpetually reinvented thrills and integrate other styles in its forward push like Anthrax side project S.O.D’s metalcore mix of thrash metal and hardcore. Heavy metal was continuing to evolve yet had still to fulfil its destiny.