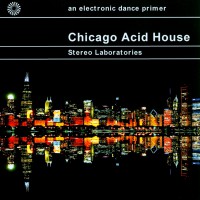 In 1987, all I knew about Chicago house music was the big chart hits by Farley ‘Jackmaster’ Funk and Steve ‘Silk’ Hurley. While ‘Love Can’t Turn Around’ sounded like a reinvented disco throwback, ‘Jack Your Body’ came from another planet entirely. Dropped into a UK battered by a Live Aid elite of decadent popsters, careerist charlatans and clapped out 70’s scum, its clattering hi-tech rhythm and disembodied voice were so completely alien it unnerved a trad rock establishment either unwilling or unable to understand what the fuck was going on.

I must admit I wasn’t too sure either, but it hardly seemed to matter. Just a few months later, with the built in obsolescence of a vintage dance craze, house appeared to be fading away before it had even got started. What I couldn’t possibly have known at the time was that all the records we’d heard up to that point were merely the tip of a gargantuan iceberg. I didn’t think house had any kind of future which was completely wrong of course; house was the future!

As this primer is all about the circuits and wires of acid house, there is little point in going over house music’s early history; Frankie Knuckles, The Warehouse and all that. Besides, while it was pleasant enough, I was never much interested in original deep house, the song based style that was clearly just a celebration of a disco past, strung out and remixed. I was far more interested in the non-musicians, the DIY misfits, the renegade DJ’s and backroom boys who jettisoned all remaining vestiges of soul and humanity to assemble a whole new machine music.

In many ways, the machinist ‘jack’ side of house reminded me of the white avant-funk and electronics of post punk. Best exemplified by Larry Heard’s dehumanised ‘Washing Machine’, essential formative tracks like ‘No Way Back’ and the dark, deranged scream of Marshall Jefferson’s astounding ‘I’ve Lost Control’ evolved with a radicalised, avant-garde sensibility, an experimental present reaching for a tangible future. Yet while these records undoubtedly nudged the door ajar, the track that kicked it wide open came more through luck than evolution, aided and abetted by a redundant, malfunctioning piece of shit technology.

DJ Pierre was a shy, 16 year old DJ from the suburbs struggling to make any inroads into the Chicago club scene until his friend Spanky bought a cheap, slim, silver box called a Roland TB-303. Designed in 1982 to play basslines for lonely guitarists, the 303 had failed commercially so was already defunct. Following in the long tradition of experimental music making, Spanky, Pierre and fellow sonic adventurer Herb Jackson began messing around with it only to find that no matter how many knobs they turned, there was no escaping it’s brain melting, demented gurgle.

Overwelmed by the sound of the biggest head fuck they’d ever heard in their young lives, the trio recorded twelve and a half minutes over a pre-set 303 beat before handing a cassette to house guru Ron Hardy outside the legendary Music Box. Playing the tape to a crowd already used to hearing some pretty weird shit, even the experienced Hardy was astounded as the people screamed out loud, dancing on their hands as if possessed.

Like most people, Phuture’s ‘Acid Tracks’ was my first inkling that house had a far deeper, darker side. Given that it sounded like it had crash landed in Chicago from some dark and twisted dystopia, it immediately became a source of dance floor fascination around the globe, and of course, also gave its name to an entire genre and youthquake revolution that was about as far from disco, 80’s electro and Kraftwerk as it was possible to get. Original deep house had been minimal but ‘Acid Tracks’ and the subsequent deluge of 303 records sounded like absolutely nothing on earth – discordant, unsettling and genuinely weird.

Ironically, at exactly the same time as the UK was adjusting to regular, first generation house tunes like ‘Love Can’t Turn Around’, Chicago was producing hundreds of DIY acid tracks, all utilising the random squelch of the 303; Pierre released the even better ‘Fantasy Girl’; Bam Bam’s ‘Give It To Me’ came on like a zombie repeating the title ad infinitum over a woman’s cry; Maurice Joshua’s cheesy, gay anthem extolled the size of his knob while Armando gifted us UK luddites a brief history of the whole thing on the brilliant ‘Confusion’s Revenge’. And there were plenty more that were equally brilliant!

What made this period such a golden age for Chicago was the sheer newness of it all. Acid was liberating because it empowered non-musicians to experiment and create tracks quickly and easily with little more than borrowed gear and imagination. It was a return to the punk ethic, except this time it was being played out in urban, black America. Yet it was evident almost from the start that acid, at least in Chicago, wasn’t built to last.

As early as November 1987, Tyree Cooper for one was declaring ‘Acid Over’, weary of the over reliance on the 303’s one dimensional squelch. While he was a little premature in his prediction, there is no doubt that having carved out what had become a lucrative market, acid was being ransacked by every on the make opportunist looking for a quick buck, their drive to commercialism spawning far too many records with too little variety.

For many, the summer of 1988 was the moment Chicago experienced an irreversible downturn. The authorities began to reign in the clubs by banning after hour’s parties and refusing late night licenses. Acid’s primary radio station WBMX went off the air and most worrying of all, record sales dropped to unsustainable levels. To make matters worse, many of the scenes prime movers had already departed. Disillusioned by bad deals they either withdrew completely or like Frankie Knuckles and DJ Pierre, moved to the East Coast, their pioneering acid days behind them.

As Chicago suffered and Detroit techno emerged from the shadows to become the new electronic dance music of choice, acid relocated too, its axis shifting across the Atlantic to the UK. While it was obvious the twenty four hour party people from Manchester to London were just getting started, it was equally obvious that for Chicago it was the end of an era.