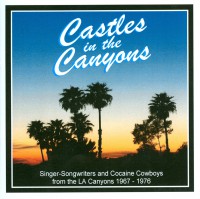 In 1969, as the Manson killings signalled the end of the hippie dream, such was the ugliness, confusion and fear in Los Angeles that there was a mass retreat to the hills and canyons surrounding Hollywood. Laurel Canyon in particular was a place where the survivors of the Sunset Strip’s halcyon days had always chilled out in rambling, split level cabins with their cats and dope. The Mama’s And Papas Cass Elliott defined the canyon spirit, operating a permanent open house policy while pursuing her love of opiates. It was so established as a rock sanctuary that Jackie De Shannon used it as an album title. Her Laurel Canyon celebrated rocks new haven in the hills but also marked the coming of age of the singer songwriter.

The canyon aristocracy of solo performers really began when Gene Clark quit The Byrds, followed by David Crosby and Gram Parsons. By the time Buffalo Springfield collapsed under the weight of Steven Stills and Neil Young’s bickering, going solo had become almost de rigueur. The first time the record industry took any notice was in June 1969 when Crosby, Stills & Graham Nash released their self-titled debut. Three singer songwriters who had formed a loose triad to record their own material, they fitted in perfectly with emerging solo talents like Joni Mitchell, ex production line tunesmiths Jimmy Webb and Carole King, and the hordes of hopefuls hanging out at Doug Weston’s Troubadour Club on Santa Monica Boulevard.

Someone who became a major figure almost by default was James Taylor, who moved to LA in December 1969. Barely connected to the canyon scene, his album Sweet Baby James inaugurated the new, mellow revolution and proved a huge influence. Like Crosby, Stills & Nash it sold vast amounts and as record after record followed suite, the world at large became infatuated with Southern California. Even unlikely contenders like Neil Young’s backing band Crazy Horse, Californian exiles America, and ex biker band the Doobie Brothers, began to taste success.

By the end of 1971, the LA record industry was a very different beast to the one it had been four years before as countless managers, musicians and all round hustlers gravitated west in search of gold. David Geffen and Elliot Roberts were two Jewish New Yorkers who wormed their way into the Laurel Canyon inner circle, set up Asylum Records and promptly pilfered the localised Troubadour scene for Jackson Browne, Ned Doheny, J.D. Souther and Glenn Frey, Don Henley, Bernie Leadon and Randy Meisner, four regulars who had banded together as the Eagles.

Unlike country rock pioneers Gram Parsons, the Burrito Brothers and Poco, the Eagles were designed to sell a million records, replacing those groups country soulfulness with a deliberate, radio friendly pop sheen. ‘Peaceful Easy Feeling’ from their debut epitomised the laid back, patched denim LA sound, while Desperado less than a year later defined their identity by harnessing their cinematic outlaw themes to easily digestible soft rock.

In effect, the Eagles signalled the end of the innocence, a move away from artistic expression to album oriented, corporate rock. When Geffen, a man who would happily have dived into a pool of shit to retrieve a dollar, sold Asylum to Warner Brothers, he effected Asylum’s merger with Elektra Records and single-handedly forged a singer songwriter/country rock axis that took hold of the American record industry. Only individuals like Joni Mitchell and Neil Young seemed able to withstand the corporate vortex, maintaining a degree of artistic integrity through sheer strength of character. The former Lady of the canyons returned from the introspective wilderness of her folkie past to fashion the chic, jazz tinged sound of Court And Spark. And yet even she was overshadowed by Neil Young who dwarfed all competition, his music more complex and beguiling than any others perhaps because he was prepared to explore the darkness and violence of those increasingly hedonistic times.

When 1975 came around, Los Angeles was a shattered, fragmented, stagnant place, the canyons rife with cocaine and an insular decadence. Of course, the Eagles continued to reign supreme, becoming fully-fledged stadium rockers when Joe Walsh replaced Bernie Leadon. For American youth the Eagles were the dream of rock incarnate and California a state of mind. But not everyone found their way to the Promised Land, even with Geffen’s financial clout. Rolling round the edges were the likes of Gene Clark, Judee Sill, Essra Mohawk, Eagles collaborator J.D. Souther and Lowell George’s much loved Little Feat. Most ended up dead or increasingly tragic and troubled figures.

While the canyon elite had all the money, drugs and playthings they’d ever wanted, the one thing they didn’t have was the sense of community that had once sustained them. Jackson Browne for one felt a failed sense of promise, choosing to address the emotional bankruptcy of rock on The Pretender.  But, it was the Eagles Don Henley, longing for credibility, who most recognised the latent creepiness at the heart of Hollywood hedonism, even though he was one of the major figures. Just when the music industry was reaching its commercial peak, Hotel California, a grandiose, semi conceptual statement about LA, symbolised the death of the dream. Where once the canyons had represented the movement for change and social justice, now they were merely a part of the morally corrupt entertainment vortex of money and celebrity.