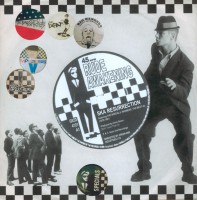 5 MADNESS / Bed And Breakfast Man / One Step Beyond October 1979

19 THE PIRANHAS / Fiddling While Babylon Burns / The Piranhas September 1980

When the ska revivalists first appeared in 1979, they were just one element of a larger mod revival continuing the working class passion for uptempo black music, sharp clothes and amphetamines, the polar opposite of punks nihilistic year zero zeitgeist. The Specials, Madness, The Beat and The Selecter all started out on Jerry Dammers 2 Tone label, hooking sixties Jamaican ska up to punks livewire energy. Brisk and punchy, 2 Tone reverted back to the mid sixties, the golden age of the single, when a record was little more than a document of a group playing live in the studio. Even the stark, black and white sleeves evoked the sixties monochrome feel. And yet, the social reality of the songs was bang up to date.

If 2 Tone was a peculiarly British movement, The Specials were its defining group. A vivid snapshot of what it meant to be trapped in a post industrial Midlands town at the dawn of the eighties, Dammers sardonic lyrics, as voiced in a post punk monotone by Terry Hall, encompassed tales of teenage pregnancy, piss stinking clubs and racist violence, tapping into the mood of a divided, disillusioned, grey nation that had just elected Thatcher.

The stylistic motif for 2 Tone was the black and white check, symbolising the idea of racial harmony and musical hybrids. If one moment marked the breakdown of late seventies fascism it was when ‘Gangsters’ crashed into the top ten. The skinhead element had always struggled with loving Jamaican music while hating Jamaicans but with 2 Tone they struggled to sustain that odd philosophy despite some of the more pathologically neanderthal still sticking with it. Virtually all punk related gigs at that time involved taking your chances and hoping you could outnumber or outrun the skins, and none more so than those by 2 Tone’s most visible standard bearers. One particular night at Bracknell station is still etched in my memory, bricks and bottles raining down as we prayed the last train home would be on time for once.

Like The Specials, The Beats concept was punk meets reggae although in their hands it was more like fast skank than ska. I always thought there was something a little too morally impeccable about The Beat. They weren’t dull but they were definitely worthy. That’s something that could never be said of Madness. Initially, the North London seven piece seemed like pure comic relief next to the sombre Specials but behind the off putting ‘nuttiness’ was an intelligence and melancholy that gradually came to the fore as they morphed into a bastardised cross between The Kinks and Ian Dury. Madness attracted the largest skinhead following of the lot, undoubtedly because they were the only ska group with no black members at all. Initially reluctant to dismiss the bootboy element they eventually conceded but its still slightly depressing that the only all white 2 Tone associated group should have the biggest long term success, while The Selecter, all black except one, were the first to fade away.

The rise of 2 Tone encompassed two other groups who went on to massive success but could never be called ska revivalists. Both UB40 and Dexys Midnight Runners were wanted for 2 Tone by Jerry Dammers, both with completely different yet valid connections to the movement through reggae and soul respectively. Inevitably, as the momentum increased, a vast exploitation industry sprang up, churning out shoddy black and white suits, pork pie hats and badges. Clone ska groups swarmed across the nation. They were all shit and disappeared as quickly, apart from Bad Manners and The Piranhas, bandwagon jumpers both but entertaining nonetheless. The 10-year-old skinheads loved them.

It was left to Jerry Dammers to fool all the clones when More Specials was released. Announcing the end of the black and white aesthetic with its full colour cover, the music’s uneasy, kitschedelic mix of movie scores and muzak left The Specials pork pie hatted audience bewildered. The group too appeared uneasy, confused and dejected as they continued to drown in a wave of tribal violence at every gig. But, their finest hour was yet to come, finally arriving in June 1981 with the release of ‘Ghost Town’. Equally inspired by a trip to Jamaica and the effect of Thatcher’s policies on Coventry’s economy and nightlife, the song sketched a chillingly cinematic sonic portrait of de-industrialization. It was the most politically timely and momentous release since ‘God Save The Queen’. But ‘Ghost Town’ effectively killed The Specials and 2 Tone adventure dead. Somewhere between a movement and a fad, the ska resurrection lasted just two years, but still stands as one of the few examples in pop history of a revival that was actually better than the original, more musically expansive, more resonant and ultimately more defining of its own epoch. It is certainly the one best remembered by those around forty, who go all misty eyed with nostalgia at the very thought of it.