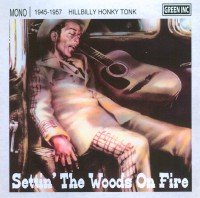 4 SONS OF THE PIONEERS / Cigarettes, Whiskey And Wild Women / Single A Side February 1947

Single A Side September 1948

13 VANCE BROTHERS / Draft Board Blues / Single A Side September 1949

3 HANK WILLIAMS & HIS DRIFTING COWBOYS / Settin’ The Woods On Fire /

Single A Side September 1952

18 THE COCHRAN BROTHERS / Guilty Conscience / Single A Side July 1955

In 1945, country music was many, very separate things: old time fiddlers, western swing, cowboy songs, hillbilly, bluegrass and brother duets. Best of all was honky tonk, which unlike any other country style, had grown from the cities, the new home for displaced country folk seeking work and a better life. The idyllic rural life – Mama’s cooking, the family bible, and the little old log cabin down the lane – was disappearing fast.

It was Texan Ernest Tubb, a onetime Jimmie Rodgers protégé, who first used the electric guitar to popularise honky tonk, so signalling the upheaval of country’s folky, acoustic heritage. At the time, this new music struck the conservative, country world as one big, sour note. But, after Tubb and his Texas brethren had picked the locks, the doors swung open, and honky tonk took over the show. Super powered, border radio broadcasts took the music into more homes than ever and Billboard began a best seller’s chart (as Juke Box Folk Records). Very soon, country was bigger and better than ever.

The post war decade is thought of as its golden era. The list of icon’s who entered the spotlight then is enormous: Lefty Frizzell, Faron Young, Webb Pierce, Ray Price, George Jones, Carl Smith, Johnny Horton and Hank Snow are just the heavyweights, with the lesser known Leon Payne (writer of the legendary ‘Lost Highway’), Hawkshaw Hawkins, Moon Mullican and Werly Fairburn filling in some of the cracks. But, the era truly peaked with the arrival of tall, skinny Alabama boy, Hank Williams.

Someone wrote that Hank was ‘a mixture of whiskey, lamb’s blood, and grave dirt’. That just about sums him up. A crude, but incredibly expressive singer, he was a prolific writer, sometimes recording as many as three classics in an afternoon. His songs instantly hit a raw nerve, embodying, in less than three minutes, all the beauty and sadness of country, and his own turbulent, tortured life. Hank single-handedly raised the stakes, almost beyond reach. And he was somewhat prophetic.

When rock’n’roll finally arrived, mere months after Hanks sad demise on New Years Eve 1953, it was considered a black and white stew of rhythm and blues and country honky tonk. But poor white southerners and blacks had always mixed, and sensibilities of one genre were often reflected in the other. Hank Williams learnt his first chords from a black street bandleader, and perhaps because of that, he anticipated rock’n’roll a good six years before Billy Haley. What is ‘Move It On Over’ if it’s not ‘Rock Around The Clock’ Part One? And he wasn’t the only one. The nearly forgotten Delmore Brothers, The Maddox Brothers, Hank Snows faster stuff, and even Tennessee Ernie, all added a country boogie beat that hinted at rockabilly mania.

Honky tonk remained centre stage until 1956, when it was unceremoniously shoved aside by rockabilly, the bastard cousin of rock’n’roll. If Hank and Lefty had been the vision of turmoil, Elvis, Gene Vincent and Johnny Burnette, all former country boys themselves, showed a new generation how to let the anguish out. Some honky tonkers, like Moon Mullican and Curtis Gordon, came close to blurring the lines, but just as rock’n’roll consumed R&B, so rockabilly consumed honky tonk.  The rise of the slick, ‘adult’, Nashville sound marginalised honky tonk even more. Eventually it did find a new home, some 2,000 miles west of Music City, in Bakersfield, California. There, Buck Owen and Merle Haggard kept the fever alive for a few years at least.