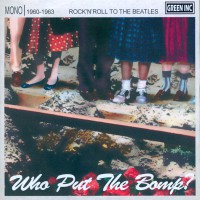 11 CHUCK BERRY / Jaguar And Thunderbird / Single A Side September 1960

15 THE SHIRELLES / Will You Still Love Me Tomorrow? / Single A Side November 1960

Nineteen hundred and sixty was supposedly one of the worst years that rock’n’pop ever went through. After the manic thrill of the fifties, everyone had gone to the moon. Elvis returned from the army with his balls removed. Little Richard had got religion, Chuck Berry was in jail for some offence with a teenage girl while Buddy Holly and soon Eddie Cochran were dead. It was a wholesale plague, a wipe out!

Ofcourse, new teen idols came up to replace the gone heroes but inevitably they weren’t in the same class, just a continuation of highschool. Owing more to showbiz values than pure rock’n’roll, teen appeal was everything as talent took a back seat. There were the odd exceptions though. Unfairly dismissed as corny lightweights, Dion Dimucci, Del Shannon and pasty pug Roy Orbison proved to be genuine innovators, singing their own songs and playing their own guitars, moving rock’n’roll on. Pure pop, all of them. Britain too had its fair share of teen idols even if they were mostly shite. Billy Fury was top dog, cutting some cool self-penned rockabilly, but the best pre-Beatles British record by a wide margin was Johnny Kidd’s ‘Shakin’ All Over’. No-one else, not even mad Vince Taylor, got anywhere close.

Amongst all the teen idols, rockabilly latecomers, doo-woppers and fading stars was a mish mash of new variations, sufficiently different to get regional, national or even global attention. From 1960, Southern California, with its never ending images of sun, sea and sand forged its own identity, separate from highschool and rooted in instrumental rock. Dick Dale sparked surf music by drenching his guitar in reverb, and suddenly surf groups started popping up all over, even in land locked urban hellholes like Minneapolis, which somehow spawned the immense Trashmen. However, the novelty value soon wore off and it was only with hugely talented vocal groups like the Beach Boys and Jan and Dean that the trend achieved long lasting recognition.

If the surf trend was a novelty, the dance craze phenomenon was more so, record companies always keen to capitalize on a quick fad. Dance records had once been a staple of rhythm and blues, but following Chubby Checker’s twist; the bomp, the hully gully, the zombie, the mashed potato and various chickens coined it in. These records were the gloopy epicentre of early sixties teen culture.

Phil Spector knew a thing or two about teen culture as well, turning that intuition into monster records. In two years he went from small, Bronx runt to paranoid, demonic tycoon, his Wall Of Sound creating a vast, Wagnerian noise behind The Crystals and The Ronettes. Ofcourse, girl groups were a phenomenon in themselves, but Spector was more important than all of them. What he really signified was good news for talented losers, the revenge of the nerds. And he wasn’t alone as maverick producers like London’s budget version, Joe Meek, explored the possibilities of sound.

In retrospect, the plethora of styles between the death of rock’n’roll and The Beatles was inevitable, mostly because youth culture is ephemeral and must change to stay alive. Girl groups, doo wop harmonies, pop craft, schmaltz and hard driving rock’n’roll all had a massive influence on the Fab Four, although those other mainstays of sixties rock, the Stones, were seemingly only touched by Chuck Berry and R&B. In the end, it was The Beatles simplicity and sheer force of personality that made them so attractive and took them onto global domination. Most everyone here became instantly obsolete and by the first days of 1964, the cultural axis had swung from America to Britain. The times they were a changin’.