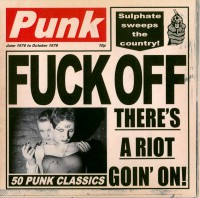 1. The Clash ‘Complete Control’ Single A Side September 1977

2. Generation X ‘Your Generation’ Single A Side September 1977

6. The Adverts ‘Safety In Numbers’ Single A Side October 1977

22. The Clash ‘White Man In The Hammersmith Palais’ Single A Side June 1978

Punk meant a thousand different things to a thousand different people but to me, a 16 year old boy kicking against the oppressive, colourless shades of 1976 Britain, it represented absolute freedom. Punk said ‘believe in yourself and if others don’t like it they can fuck off’. In fact, the sound I remember most is not the everlasting thrash of buzzsaw guitars, but the everlasting fuck off-ness of it all because punk was the ultimate Fuck Off!

It was the outsider aesthetic writ large, an explosion of negatives and the rejection of old values; dark, tribal, alien and full of black humour. Punk attracted all those who had been cast out, those who felt useless, unworthy or ashamed, bringing together Bowie victims, teenage misfits, gays, artists, disco slaves, junkies, football hooligans, intellectuals and outsiders from every class. And I felt like one of those outsiders.

I’d left school as soon as I could and signed on for £9 a week. I’d never had it so good. I spent my time dreaming, listening to records, devouring the weekly music papers cover to cover. Desperately seeking excitement, it was inevitable I would become intrigued by the Sex Pistols and the whispers of punk, the stars finally aligning on Tuesday, 29th June 1976 when five of us scraped the cash together for a trip to their 100 Club show. In my youthful mind London was still Dickensian and mythical so that alone was excitement enough, but when the Pistols hit the low stage and launched into ‘Flowers Of Romance’ I was changed forever.

I‘d never seen or heard anything like it and from that first second I knew I could be whatever I wanted to be, and do whatever I wanted to do. Spellbound, we returned home, cut our hair, reconstructed our flares into drainpipes, sprayed our shirts, pierced our ears with needles, snorted our first lines of sulphate and speeded into an uncertain future. It really was as simple and quick as that.

I lived each day with no thought of the next, my huge leap into the everlasting present of the teenage an incredibly intense rite of passage that became almost messianic. Punk was a secret society with the most glorious soundtrack, the coolest clothes, the fiercest debates, and the most idealistic politics. My life was full of incident and adventure, and always, always, lived at a million miles an hour, fuelled by crazy, bug eyed, chemical induced energy, cheap sulphate, crap sex, seven inch singles and riotous live shows. I saw all the main players through 1976 and 1977 and a hundred more besides.

Yet punk was never about being a passive consumer, a part of the audience. Like a thousand others, I followed the first maxim of ‘Here’s three chords, now form a band’. And so with cheap Woolworth’s guitars and a borrowed drum kit, the fuzz driven Kaotix were born, destined to tour youth clubs and church halls and feature bottom of the bill at Bones, Reading’s brief punk club under the old Heelas depository in Gun Street. Little kids loved our noisy racket, but we weren’t very good and we knew it but we still played those three chords for all they were worth, and even though enthusiasm ruled over content, it didn’t matter.

One of the many myths perpetrated in punks twisted history is that it was an entirely London based revolution, centered around the Kings Road and the Bromley contingent, hanging on the every word of McLaren and wearing every costly stitch of Westwood. It’s true that with London just a 30 minute train ride away, Reading itself never had much of a scene. In fact, until the filth and fury of the Pistols truly hit the headlines in December 1976 there were never more than twenty of us even with some of the hipper Chelsea boot boys latching on to scare the prole’s in punk disguise.

It’s impossible to imagine now but the shoppers in Reading town centre used to part like the red sea when we passed through, a look of fear and loathing on their disbelieving faces. What should be remembered about towns like Reading in the 70’s is not the physical difference from London so much as the mental distance. Punk struggled to breathe in towns like ours because to be a punk, walk the streets, go to a club and get the bus home in a provincial town was to run the eternal gauntlet of pissed up, middle aged bigots wishing death and destruction on those daring to be different.

Like any youth movement, punk carried with it the seeds of its own destruction. We knew it even then. There was a period just after the moment of high punk in June 1977 when, stoked by a seething, outraged, media, Joe Public started to attack and it became incredibly dangerous to go anywhere. The thrill and fun evaporated and punk descended into a miserable, violent, abyss; a squalid, caricature of its once glorious self. It was time to move on.

Obviously, trying to work out exactly when punk became post punk is impossible, not least because post punk as a genre didn’t exist. Punk music itself had never been very revolutionary, just a return to bog basic rock’n’roll. After the initial buzz, new groups began to sound exactly the same although that didn’t seem to stop Neanderthal’s like Sham 69 and the UK Subs building careers by flogging the same dead horse. The same definitely can’t be said for Wire who had always existed on the outer limits but it was Magazines ‘Shot By Both Sides’ that signalled a real change before Adam Ant, Subway Sect, The Buzzcocks and The Banshees underlined the fact. It was still punk in attitude and meaning yet musically had moved on. Punk yet not punk!

However, the record that dealt punk the final, killer blow while simultaneously heralding a new beginning came from the man who had kicked off the whole shebang, certainly for me. ‘Public Image’ was John Lydon’s very public exorcism of his inner demons, Johnny Rotten, the Pistols, McLaren, sad Sid and his audience. An extraordinary record, it took everything we knew about rock’n’roll - defiance, self definition, guitar heroism, joy from despair - and twisted it into a completely new form. And that most definitely was that. The end! Finito!

I guess in reality my involvement with punk lasted for little over a year yet it helped me lay the foundations for the rest of my life. Punk was about freedom of spirit and gave me the belief to do whatever I wanted and the confidence to say no even when working within the confines of the machine as most of us ultimately have to do. Anyone involved from the start will reiterate those sentiments because it was liberating for us all and without it would all have accepted our fate. Punk shouted out ‘Have a go’ and that feeling of freedom and possibility has reverberated ever since. Occasionally, the older I get, that has proved something of a curse. And yet, over 35 years later, I still try and live by all that shit.