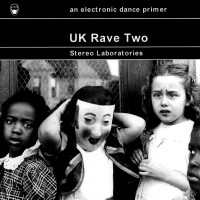 Even as an interested bystander in his late twenties, far too exhausted by yet another nightshift to dance or gobble E’s, I found the first phase of rave easy to appreciate. Able to equate what I was hearing to the improbable return of early 80’s, post punk electronica, my enjoyment of the whole shebang was based solely on the aural, sonic experience, so debunking  the theory that rave could only make sense to a listener under the influence. On the other hand, the second, hardcore phase was far more of a challenge.

Heated by the flames of Ecstasy, the mix of DIY barbarism pieced together from looped breakbeats, sub bass frequencies and noise stabs possessed a delirium and intensity that was pure thuggery. The avant-garde madness was unlike anything I’d ever heard but with an obvious hip hop and Jamaican influence that could only have come from the streets of urban Britain, I found it both fascinating and thrilling; the sound of a new generation reshaping their near musical past into something they could call their own.

While hardcore dominated the underground, rave had already developed an overground of staggering proportions, moving rapidly from outlaw party zone to highly controlled pleasure experience. The culture itself had become highly ritualised with a uniform of floppy hats, hoodies, baggie’s, Lycra, face masks, whistles and glo-sticks as a lucrative circuit of megarave’s evolved. The most successful like Amnesia, Fantazia and Eclipse attracted as many as twenty five thousand eager punters by promising no expense sparred spectacle’s featuring not only big name DJ’s but outfits like Bizarre Inc, Shades Of Rhythm and The Prodigy, all promoted as rock bands with regulation light shows, pyrotechnics and sets full of crowd pleasing anthems.

For the first time in rave history there were visual references for the music. No longer ‘faceless techno bollocks’, in 1991, despite virtually no radio play, the UK charts were attacked by a battery of hardcore pop anthems, an assault that continued right up to the summer of 1992. Urban Shakedown, Altern 8, SL2 and others enjoyed hits of varying degrees yet for every success there were literally dozens of underground outfits operating on a shoestring who shared the same anthemic sound and ambition.

The most successful of them all were The Prodigy. Dismissed as hopelessly uncool, some old skool hipsters even claimed their August 1991 hit ‘Charly’ was responsible for the death of rave. Certainly the cartoon cat and kiddy voice they lifted from a public safety film spawned a hatful of similar records combining childhood nostalgia with druggy innuendo but by then most within the hardcore underground had already changed direction to consciously push against the mainstream.

There’s no doubt that the brief period between 1991 and mid 1992 was British hardcore’s golden age although at the time the only question musically always seemed to be what next? In hardcore’s case that meant cranking up the speed to ridiculous extremes, often as high as 150 bpm, the addition of inadvertently avant-garde helium shrieks sampled from ethereal female singers like Kate Bush, Stevie Nicks or deep house soul diva’s merely adding to the weirdness. The downside was that regardless of the quantity of chemicals ingested, hardcore records became so impossible to dance to that clubbing turned into a test of endurance rather than a groovy night out. A long way from the E fuelled highs and cuddly hits of the glory years, that inevitably sparked a mass retreat from the dancefloor as raver’s abandoned all sense of adventure to return to the calming balm of the deep house or indie rock from whence they’d come. The thrill had gone, yet it wasn’t just the harsh insanity of the underground that had made them all run for the hills.

From my vantage point, I could see that much like any other culture with the nihilism of drugs as its whole raison d’être, by the Autumn of 1993 rave’s living dream had turned to living nightmare; a woozy, hippy hell hole of junked up alternative reality. As the movers, shakers and teeny megaraver’s came down with a sickening crash, unable to cope with the reality that the rest of their lives would never match their past, the sound of hardcore turned ever darker, tracks like ‘The Elements’, ‘Lords Of The Null Lines’ and ‘Valley Of The Shadows’ revealing the black hole of excess, paranoia and depression that had always been obscured by the stupidly happy mask of the smiley. What had once been euphoric and transcendent had finally turned ugly and oppressive and when the sound of darkness began to shadow the swoony delirium, rave as a mainstream youth culture was done for.

It carried on of course, as these things always do when there’s serious money to be made, while musically there would be plenty more clearly defined hybrids to twist electronic dance into even stranger shapes. But rave would never return to the creative heights of its glorious past. For many it had been an experience that had literally blown their minds. And not necessarily in a blissful, trippy way either!