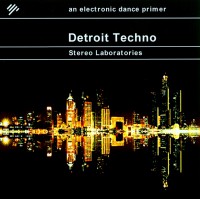 In an effort to explain Kraftwerk’s massive impact on black American youth, it was often said; ‘they were so stiff they were funky’. Now that explanation may well sound ridiculous but a quick resume of electronic dance music’s formative genres tells a different story. While New York electro’s appropriation of the Teutonic ones was obvious given Bambaata’s blatant steal of ‘Trans Europe Express’ and ‘Numbers’, Chicago acid house was inspired as much by their pioneering spirit and role as futurist non-musicians as their music. However, without question Kraftwerk’s most enduring impact came in Detroit.

For a city with such a long and illustrious history, musically and physically, Detroit in the 80’s was a barren wasteland of nothingness. Ravaged by staggering levels of decay and destruction, the remodelling of the motor industry had turned the centre into a post urban ghost town of boarded up stores and crumbling buildings. Yet in the wealthier, executive, suburbs of greater Detroit, most families remained tied to the industry. Consequently, the 80’s generation of arty, suburban, black teenagers grew up listening to so many stories about the benefits of automation that technology became an omnipresent, almost mythological ideology which resonated perfectly with the robotic rigor and glacial grandeur of Kraftwerk.

Juan Atkins, Derrick May and Kevin Saunderson were three such teenagers from the rural suburb of Belleville. They were natural loners but had teamed up to explore the primitive synthesisers of the day and play records at exclusive, private parties designed to keep the ghetto kids on the outside looking in. In the early days Derrick May also visited Chicago regularly to check out Frankie Knuckles and Ron Hardy bringing down the walls at the Power Plant and Music Box, but rather than reinvent disco, the three were intent on creating their own electronic dance.

The eldest by a year, Juan Atkins was the first to break out of Belleville, joining up with fellow college student and Vietnam vet Richard Davies to form Cybotron, a name inspired by the writings of Alvin Toffler. Like Kraftwerk, the duo were intent on celebrating the romance of all things technological and urban, the intransigent link between man and machine. In the early mid 80’s they released some of the most uncompromising, seminal electronic records to ever come out of America, including the Metropolis inspired ‘Techno City’, a track that ultimately would name Atkins own genre.

Cybotron split in 1985 when Davies opted to pursue a rock direction. Juan Atkins on the other hand was intent on venturing further into electronica, his next project Model 500 pursuing a harder, faster path with a desolate motorik and indecipherable vocals mixed as undercurrents. Yet while Cybotron and Model 500 were certainly innovative, they were still largely the creation of one man. The catalyst for a techno future only became a possibility when Atkins reconnected with his old Belleville friends. Not only did he act as their spiritual benefactor and give them the confidence they needed to do their own thing, he also provided an outlet via his Metroplex label for the likes of Eddie Folkes, another Belleville friend who had returned to music after university.

Where Cybotron and in particular Model 500’s music had been full of paranoia and desolation, Derrick May finessed his own productions to become the sound most often associated with Detroit techno. If Juan had laid the foundations, Derrick designed the final template and solidified the first wave by recording tracks like ‘Nude Photo’, ‘Strings Of Life’ and ‘It Is What It Is’ for his own Transmat imprint. May’s productions were all but stripped of electro, focusing instead on hypnotic, pulsing beats that ebbed and flowed via slow and subtle changes in a way more akin to classical music. He also introduced the wistful string-like pads outlining minor seventh chords that became a staple of the genre, forgoing aggression for a haunting sadness that was clearly the sound of a man trying to escape the world without leaving his bedroom.

Of the three, Kevin Saunderson was the youngest and the last to record. Influenced more by disco than European electronica , he would go on to massive international success with Inner City but his earlier tracks, released under a variety of aliases including Kreem, Reese and K.OS hitched a dark funk sensibility to techno’s more regular chill of modernity.

In the late 80’s, to the world outside the mid-West, house was an all-encompassing term for electronic dance music and as such, Detroit techno was treated as nothing more than a subset of Chicago house. However, by the spring of 1988, acid house’s primacy was being challenged and outsold by techno even in Chicago. Suddenly, techno was recognised as a distinct genre in its own right and with its own agenda. The first wave reached its peak over the remainder of 1988 and 1989. While Detroit was vibrant and pumping, the new genre was even more popular on the flourishing European rave scene where, despite being more deep house than techno, Kevin Saunderson’s ‘Big Fun’ and a re-release of ‘Strings Of Life’ gained anthemic status.

Then it all seemed to go wrong as Detroit clubs began to close and the Belleville Three suffered a number of seemingly insurmountable problems; Kevin Saunderson opted to ride the naff R&B gravy train for all it was worth; Juan Atkins took his album orientated ambitions to Belgium while Derrick May, disillusioned with being ripped off at every turn, gave up music making altogether. Even worse, lucrative DJ-ing opportunities in Europe took the three away from their home city increasingly more often. Without its mentors, techno was pushed back underground where younger, hungrier, even more radicalised local producers seized the initiative.

Where the Bellville Three had been raised on a diet of 70’s Kraftwerk and P-Funk, this new breed were in thrall to 80’s synth pop, industrial and electronic body music. They would soon be hailed as the future sound of Detroit, yet that was of little consequence to the original innovators whose moment in the spotlight had drawn to an inglorious close.