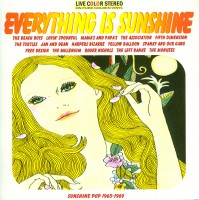 7 THE LEFT BANKE / Pretty Ballerina / Single A Side December 1966

By the summer of 1965, the youth of America, desperately searching for their own identity, had already been through a multitude of styles, from high school to doo-wop to surf. More recently, the British beat invasion had changed the way rock’n’pop was played while the American folk movement had changed the way it was perceived.

The studio wunderkinds of California began to turn their hands to a softer brand of pop. Brian Wilson’s genius was their original inspiration but with his mind stuck in neutral, a gap had appeared in the harmony pop market, which was only partly being filled by folk rock. As established groups like the Lovin’ Spoonful and Mama’s And Papa’s began using softer vocals, West Coast writers and producers began to skip happily into the land of parks, kites and sunshine.

Curt Boettcher (The Association, The Millennium), Gary Zekely (Yellow Balloon) and Gary Usher (Sagittarius) all helped define sunshine pop. All three were writers and artists but they were also inventive studio wizards who made the most of the sudden advances in technology. Working under an ever-changing variety of names, they took harmonic influences of the Beach Boys and the lighter end of doo-wop, merged them with strong, melodic hooks and sprinkled them with the dippy scent of psychedlia. The Summer of Love provided the perfect backdrop, so much so that ultimately  even mediocre British groups like Simon Dupree and Marmalade, cottoned onto the possibilities and after some dubious early attempts, quickly became au fait with the art. Of course, it was all pure escapism, meaning absolutely nothing but 40 years later the music remains as dreamy as ever.