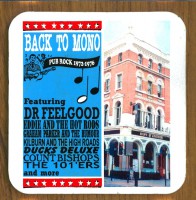 Back in 1972, long after the flame of psychedelia had been extinguished; the British music scene was dominated by emerging stadium supergroups, progressive rock, or the glam singles thrill of Bolan, Bowie and the Top Of The Pops world. Unknown groups didn’t stand a chance; venues wouldn’t book them without an agent; agents wouldn’t take them on without a record deal, and record companies wouldn’t sign anyone without seeing them live. And so it went, in ever decreasing circles until American group Eggs Over Easy walked into The Tally Ho pub in Kentish Town to ask if they could play on a slow night. That one almost insignificant event gave rise to a brand new scene, rapidly christened pub rock, and sparked a minor phenomenon that helped pave the way for the punk zeitgeist four years later.

Quick to adopt a similar low key approach as Eggs Over Easy were London country rockers, Brinsley Schwarz, already bearing the scars inflicted by an unsympathetic music industry, but still driven on relentlessly by future producer and fleeting star in his own right Nick Lowe. By 1973 they had been joined by a multitude of others like Ducks Deluxe, Starry Eyed and Laughing, The Winkies and Ace, all desperate for anywhere to play.

By mid 1974 people had even started cutting their hair again for the first time since 1966 and pub rock was one of the hottest things in London. Magazines like Let It Rock began to chart the rise of groups that disdained any flash in a conscious return to basics, playing on a rapidly increasing circuit of pubs stretching into the provinces. The Nags Head in High Wycombe and The Target in Reading both became regular stop offs and would become regular personal haunts.

Inevitably, as pub rock bands gathered a reputation record companies began sniffing around. However, any resulting vinyl was often disappointing, especially when compared to the raw energy of live shows. In addition a lot of the early pub rockers were content to play tired rehashes of country, blues and R&B and that didn’t always transfer to record. The only sign of anything new were Kilburn And The High Roads, featuring the menacing, twisted performances of polio victim Ian Dury, with razor blades in his ear and venom in his heart. But, what eventually pushed the pub scene into the national consciousness was the breakthrough of Dr Feelgood from Canvey Island, the ultimate working band who electrified the metropolis and beyond with their manic two minute blasts of frenzied R&B. Threatening and confrontational, they were the true forerunners of punk, shocking laid back audiences into action with front men Lee Brilleaux and Wilco Johnson the epitomy of East End villains in their grubby retro suits.

Two more Southend outfits – the Kursaal Flyers and Eddie And The Hot Rods – came through in the wake of Dr Feelgood. Together with the Count Bishops, Hammersmith Gorillas, Joe Strummers 101’ers and Graham Parker they turned pub rock into a truly viable alternative to a mainstream still wallowing in hard rock and progressive rock fantasia. Younger than their peers, Eddie And The Hot Rods were a natural progression to punk, instantly adored by bored teenagers like me who easily identified with their anger and frustration. But by January 1976 punk’s movers and shakers were already in action as the Hot Rods released their first single, ironically titled ‘Writing On The Wall’.

By the end of the year punk had overtaken them and they suddenly seemed outmoded and outdated, a throwback when all we wanted to do was look forward. Dr Feelgood and the Hot Rods carried on regardless with some success while Ian Dury, and even old stager Nick Lowe, reinvented themselves for the new audience. Pub rock is now much maligned and a term often used to describe bands going through the motions. But punk and all that still owes it a huge debt, for without it the new order may never have found anywhere to play or a youthful audience so ready for change.