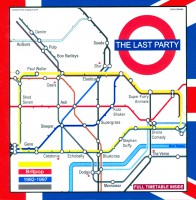 In the spring of 1995, Damon Albarn was one of the most famous people in Britain. He had been elevated to the dizzy heights by his band Blur’s success at that years Brit Awards where they received an unprecedented four awards. Up to that point their album Parklife had sold close to 500,000 copies but Blur were not quite a household name. Dozens of journalists suddenly decided to make up for lost time.

‘In private Damon lives in a smart London home with Justine Frischmann, lead singer of Elastica. The couple are well on their way to becoming the King and Queen of British pop…….The songs on Parklife speak of hope, optimism, fun, and a good dose of beer and skittles….Blur are as British as Madness, The Kinks and The Small Faces.’

Such in a roundabout way, was one of the more crassly phrased explanations of what was known as Britpop. The word itself had flitted around for six months, before Blur’s high profile rocketed it towards the national media. For a brief period it was used by both the anxiously fashion conscious and the fusty squares.

The idea of Britpop originally formed in the minds of Damon Albarn and Suede’s Brett Anderson but mavericks like Lawrence Hayward’s Denim, Luke Haine’s Auteurs and Jarvis Cocker’s Pulp were following a similar path. It comprised two distinct strands. Firstly, as exemplified by Blur, it referred to the idea of young British groups reconnecting their music to a fleetingly forgotten heritage, stretching from The Beatles, The Kinks, The Who to the more leftfield elements of punk, post punk, Two Tone, The Smiths and beyond. Tying together such influences was the articulation of quintessentially British experiences, a quality given almost religious importance by the domination of grunge that took root late 1991, and lasted until Kurt Cobain blew his brains out in April 1994. On both Parklife and its trailblazing predecessor, Modern Life Is Rubbish, Blur mapped out a uniquely British world of Doc Martins, London street markets, darkened arterial roads and civil servants escaping to the Essex coast.

Equally important, Britpop was built around commercial success. The kind of groups long denied access to the charts were suddenly having top 30 hits, appearing on Saturday morning TV and cosying up to Radio One DJ’s. Britpop was a natural outgrowth of indie music, the stuff that in the slipstream of punk had expressed its hostility to the mainstream by setting up an alternative musical universe, hardcore indie disciples viewing mass-market success as a pollutant of artistic purity. By contrast, in the Britpop era there was a completely different mindset with success and stardom being both a necessity and seemingly easy to achieve.

Early on, the fence separating mainstream and alternative was kicked down by an array of groups – The Boo Radleys, Sleeper, Shed Seven, Gene, Echobelly, Supergrass, Dodgy, Menswear – many of whom began to adjust their sound according to a new found populism. The result was a period accorded the highest of accolades, a belief that Britain was passing through an era as potent as the peak of the sixties. The Britpop group’s debt to the music of that time made comparisons easy while the health of other parts of the cultural patchwork – art, fashion, sport, film – served to give them the decisive ring of truth.

Much of the Britpop tale centres on a clique of London based musicians, although the animosity between them - most notably when Damon Albarn wooed Justine Frishmann from Suede’s Brett Anderson - suggests otherwise. At various times their number included members of Blur, Elastica, Pulp and Suede. The latter group played a crucial role because it was in the deluge of acclaim for their first records, all of them audacious, successful and very, very British, that led to a Select magazine feature in March 1993, championing all sounds British and the move away from grunge germinating in Camden Town, The Good Mixer pub and clubs like Blow Up, Fantasy Ashtray and Smashing. If the story of such bands suggests an exclusive party then Oasis were the unexpected gatecrashers. In the spring of 1994, came a knock on the door as the proud gobshites from Manchester announced they had come to avenge both London’s brief dominance and its arty farty ways. It was Oasis who finally purged British music of any lingering problem with mega stardom. After all, their opening statement on Definitely Maybe was ‘Rock’n’Roll Star’.

For a brief time, an uneasy truce prevailed, with Damon Albarn in particular championing the Northern intruders, before a tide of laddism, sparked by new magazine Loaded, and twats like ginger ego Chris Evans, found a ready soundtrack to its booze, birds and footie aesthetic in Oasis who unashamedly celebrated all things knuckle dragging. The ideological differences between them and their peers rapidly pulled them apart. In August 1995, Oasis and Blur went at it head to head with the release of competing singles on the same day. This chart clash has become Britpop’s most celebrated episode, Blur just pipping their rivals to No 1, but marked the point where some of the movement’s joy began to slip away and an altogether more dysfunctional mood took over, fuelled in the main by drugs.

Thanks to the wealth the music had created, most musicians rapidly succumbed to rocks traditional nemesis and cocaine fell like snow on London. Many soon discovered they were in need of something to bring them down, and heroin duly obliged. The Gallagher’s foreswore smack and sped on to cocaine based artistic catastrophe but many took to heroin with relish. Certainly Elastica, arguably the most iconoclastic Britpop group of them all, fell from grace without explanation and represented a sad example of how heroin corroded even the most shining talent.

Ironically, while the question on everyone’s lips through the summer of 1995 had been Blur or Oasis, the correct answer was always Pulp. A few months before, the magnificent ‘Common People’ had reached No 2 and Pulp had triumphantly headlined Glastonbury. It was a tribute to 15 years of plugging away, always out of step. A year later Jarvis Cocker was hurled full on into celebrity when he waggled his arse in the face of Michael Jackson’s pomposity at the 1996 Brits.

By then Oasis were Britpop. They rose from their supposed defeat to Blur and became one of the UK’s biggest groups ever. Unfortunately, with their ever increasing domination came an influence reflected in Britpop’s development or rather lack of it. As of late 1995, the more challenging aspects had fallen away to be replaced by a shameless pursuit of the market. Worse still, the artful use of sixties influences was superseded by a very moronic kind of revivalism with Noel Gallagher at its head. The likes of Ocean Colour Scene and Kula Shaker were only too happy to follow and reaped the benefits. The peak of Oasis ambition came in August 1996 with a vulgar series of Knebworth shows and the following year when Noel Gallagher became one of Tony Blair’s most visible rock’n’roll associates in the wake of Labours election victory.

Within weeks of the Blair debacle and accompanying front page spreads, it was clear Britpop’s days were numbered, sped on its way by Be Here Now. The most feverishly anticipated record of the era, it proved a depressingly tawdry document of sudden wealth and excessive cocaine use. That one album crystallised a key moment in the forty year progress of British pop and rock. It was clear that Britpop had replaced the need for innovation and iconoclasm with fulltime worship at the altar of greed. Whereas the most notable British music had long been countercultural, this new incarnation drew all its energy from being part of the mainstream, celebrated in the tabloids and drinkies with the government. The result, which still stands a decade on, was that British music lost its excitement, experimentalism and artful defiance – in essence, the otherness – that had always characterised its best moments.

Blur were the only group to provide a noteworthy musical moment in 1997 when they released their self-titled fifth album. Pushing Damon Albarn’s naked ambition aside, largely at the insistence of guitarist Graham Coxon, they rediscovered their artistic essence to create some of their best music and consciously removed themselves from the vulgar sales and media rat race.

But the final death blow to Britpop was aimed squarely at laddism and thrown surprisingly by the Spice Girls. Suddenly, with the resurrection of manufactured feminized pop, the revivalists terrace ready slabs of populism sounded dull and dated. By the end of 1997, Ginger Spice’s micro dress was the new Union Jack icon, Robbie Williams was the new Liam and Britpop was well and truly buried. Sadly, the British indie landscape was as well. And yet for all the misplaced hyperbole, bandwagon jumping and fall out, the era did witness the creation of some truly brilliant music.

‘Popscene’ marked the start, reawakening the ghost of English new wave and rerouting its rage towards a modern kind of cultural wash out. Suede’s early singles blended outsider, bedsit lyrics with the direct punch of Glam era Bowie while edging towards something shadowy and complex. Elastica’s ‘Stutter’, by contrast, was as primal as possible, little more than two minutes of buzzsaw punk, its musical brevity startling, its lyrics a punch at rock’s macho piety. Oasis, of course, would eventually restore that particular tradition but initially they also oozed an adrenalized excitement, from ‘Supersonic’ to ‘Stay Young’, their last great song.

Britpop also edged into more profound territory. Part of its unspoken aim was to reconnect the link between British groups and their social context, to soundtrack the times. Pulp’s ‘Common People’, still Britpop’s most elegantly angry record, remains music’s most accomplished treatment of class while Blurs ‘This Is A Low’ infused both the British climate and landscape with a drama as affecting as any American myths, tying its wonders to the subtle magic of the shipping forecast. And then there were the classic Britpop albums: Suede, Modern Life Is Rubbish, Parklife, Definitely Maybe, Elastica, I Should Coco, Morning Glory, Different Class, Blur. Listening to all these, its easy to see why their authors were held up as architects of a gleaming pop cultural age. The late sixties and seventies generations have often looked like the unlucky victims of a historical curse, fated to live in eternal thrall to the pioneers who went before. As the Britpop story proved, for a time at least, some of their number managed to step out of the shadows to create their own legend.