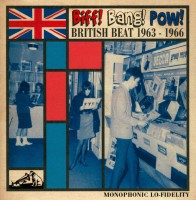 6 THE MERSEYBEATS / Fortune Teller / Single B Side August 1963

Teenage Brit’s have always been attracted to the grittier realities of popular American culture. So it was in the mid fifties when rock’n’roll hit these shores and Lonnie Donegan kicked off the skiffle boom, creating the first spark of interest in black music forms. But right up to 1962, Britain remained stuck in a weary musical vacuum, homegrown rock’n’roll records generally being nothing more than shoddy copies of American million sellers.

Of course, The Beatles changed all that. From as early as 1960, with a multitude of their Liverpool contempories, they had played out a wild apprenticeship in Hamburg, returning home as kingpins of a feverish local scene, the legendary Cavern at its epicentre. The rough hewn, newly named Merseybeat wedded the early sound of rock’n’roll heroes with newly evolved black styles, girl groups, Motown and proto soul. The Beatles in particular, added enough of themselves in appearance and demeanour to create a real alternative to the creaking mainstream.

In 1963, Britain was ripe for cultural change. Teenagers were desperately seeking something to get excited about that had no connection to their parent’s generation. Merseybeat, led by The Beatles, fitted the bill perfectly. As the country went Beat crazy, Liverpool was inundated with record company scouts, indiscriminately scouring the clubs for the Next Big Thing. The Big Three, Johnny Sandon, The Remo Four, The Merseybeats, The Undertakers, The Mojos, The Escorts, The Dennisons, The Koobas and The Searchers were all caught up in the rush but it was to be a short lived phenomenon.

By the summer of 1964 the golden days were gone. Much fuss was made at the time about the unique Mersey sound but once groups had the rough edges smoothed off in the recording process there was little to distinguish them from others in the country like Brian Poole and the Tremeloes (famously signed by Decca instead of The Beatles), and the Dave Clark Five. As popular as The Beatles were, the rest of the Mersey groups were far less influential, producing limited original material and presenting themselves as traditional showbiz entertainers. It was left to a concurrent scene germinating in the south to provide the necessary springboard for the sounds of the future.

The tiny rhythm and blues scene of the early sixties began in the West London suburb of Ealing. That’s where two jazzers, Alexis Korner and Cyril Davies, started the country’s first ever R&B club in the spring of 1962 to provide an outlet for hordes of youthful, middle class males obsessed with Howlin’ Wolf, Muddy Waters, Sonny Boy Williamson and the blues. Charlie Watts, Brian Jones, Keith Richards and Mick Jagger were all Ealing Club devotees and by 1963 The Rolling Stones were a fully-fledged outfit, playing The Crawdaddy, The Marquee and a host of other clubs, unwittingly sowing the seeds for Manfred Mann, The Paramounts, The Yardbirds, Pretty Things, The Animals, Downliners Sect, The Kinks, The Primitives, The Fairies and Them.

British R&B ran in tandem with the Beat boom, the two being part of the same equation. Beat injected the excitement into the R&B scene; the R&B scene bought a rougher edge and some mighty musical muscle to Beat. And the Stones were the perfect marriage of the two, much to the disgust of an outraged establishment. More than the Beat boom, R&B was always about a club scene rather than recording although, with a more aggressive studio approach, what records there were have generally dated far better. The Birds for example sound as invigorating now as then: ear-crunching guitars, vocals that scream attitude and an unstoppable pace. Others like John Mayall were more purist in approach while Georgie Fame, Zoot Money and Graham Bond added a jazzier flavour to their R&B menu. Most of these were popular amongst Mods; a uniquely British movement of elitist style guru’s able to trace their genesis back to 1959.

Unfortunately, the Mod stereotype was based on the 1964 model, which hit the front pages in the Mods v Rockers south coast beach battles. The Who and the Small Faces emerged as Mods from opposite sides of London, both injecting soul and R&B into their music. But, whereas The Who and their first incarnation, The High Numbers, were manufactured to capitalise on the Mod phenomenon, the Small Faces, The Action, Hipster Image, The Creation and even future superstar, Rod Stewart, were the genuine article. Ironically, despite their honourable efforts, true Mods never listened to any of them, much preferring authentic black American styles.

The Mod and R&B scenes naturally evolved through 1965 and 1966, groups like The Yardbirds in particular introducing a revolutionary new sonic palette. Following The Beatles example on Rubber Soul, British pop generally became more sophisticated, moving further away from its original American influences in favour of our own cultural heritage. Ultimately, 1966 proved the highpoint of a tumultuous, life-changing era. It was the year of pop art, pop genius and Swinging London but with the introduction of LSD the more enlightened groups were already turning on, tuning in and dropping all their spikiness for the psychedelic underground. It was also the year America began to reassert itself for the first time since the inception of rock’n’roll. Pastures new beckoned but the British beat boom, and most of these forgotten groups, is where it all began.

The image gallery is empty.