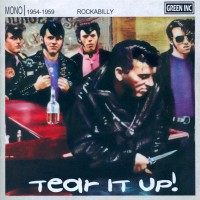 29 SPARKLE MOORE / Skull And Crossbones / Single A Side November 1956

17 DWIGHT PULLEN / Sunglasses After Dark / Single A Side March 1958

When Sam Phillips released ‘That’s All Right’ backed with Bill Monroe’s pastoral classic ‘Blue Moon Of Kentucky’, what followed was the heyday of rockabilly and Sun Records. Rockabilly was fast and aggressive: simple, snappy drumming, sharp guitar licks, wild country piano, the sound of kids who came from all over the South to make records for Phillips and his imitators. Rockabilly came and went and even with Elvis’s Sun singles, all the rockabilly hits put together sold a lot less than Fats Domino’s. But it was more important than sales alone. Rockabilly fixed the crucial image of rock’n’roll: the sexy, half crazed teen, standing on stage singing his guts out. Maybe more importantly, the image was white. Rockabilly was the only style of rock’n’roll that proved white boys could be as strange, exciting, scary and free as the black man ruling the airwaves.

While it lasted, rockabilly was a place of freedom, a place to take chances. The music was ominous, funny, kicking up rhythm and bursting with exuberance, determination and urgency, full of self conscious novelty and experiment. Most of the first rock’n’roll styles were variations on black forms that had taken shape before the white audience moved in and forced those forms to turn their way; rockabilly was self contained, a world of its own, and as authentically new as any music could be.

I read a story from a fifties comic that captured the spirit of rockabilly as well as any record. ‘There were these Southern farm boys, long, lean, tough and good humoured. They would flash pictures of Gene Vincent, and Johnny Burnette and Elvis, kick raccoons to death with their bare feet, rustle sheep, chase Indian girls into the bushes, and make it into town on a Saturday night to watch the razor fights. In a small country town they were the epitomy of youth, easy to idolize; one night they got drunk, drove their car to the railway tracks, and got themselves blown to pieces by the night train to Memphis. They were 17 years old’.

That was rockabilly. But it was also squeaky Charlie Feathers, a hillbilly singer of no special talent or even much drive, trekking up to Cincinnati after rejections from Sun for the chance to yell “Aw, turn it loose!” and then disappear. Rockabilly was genuinely crazy backwoods boy Hasil Adkins, who recorded himself on a primitive tape recorder only to be acclaimed thirty years on. Rockabilly was the Collins Kids, sixteen year old Lorrie, and her brother Larry who was just fourteen.

“Maybe someday your name will be in lights”, Chuck Berry promised all these young rockers, but most never got past the “maybe”! But there was a price for all that unexpected vitality and flash. Carl Perkins, still billing himself ‘The King of rock’n’roll’ on the thin line of one hit and a score of failures, slipped into alcohol; Jerry Lee Lewis spectacularly fell from grace after marrying his thirteen year old cousin; Gene Vincent found himself exiled to England, and died of a bleeding ulcer before he was forty. Chasing after Elvis’s pot of gold, Eddie Cochran, Johnny Burnette and Buddy Holly died in land, sea and air accidents. Most simply vanished and were forgotten – if they were lucky to have been known at all. They fell back into the predictability of country music, or the day to day sameness they’d fought so hard to escape. All they left behind was rock’n’roll, and an audience that over fifty years on is still acting out their fantasies and seeking revolution and excitement in their ghosts.