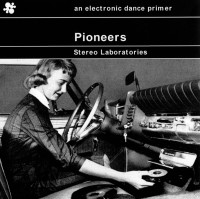 My interest in electronic music has always had less to do with dancing and more to do with the radical nature of the records; the sonic experience rather than the physical, raving one. I always heard synthesiser’s and the march of the machines as another way out of the straightjacket punk had tied itself up in. Why bother learning three chords to bash out yet another version of ye olde worlde rock’n’roll when with no musical ability but loads of ideas you could still make great records.

The idea of harmony between man and machine and an attitude to making music that screamed ‘The Future’ had proliferated within the avant-garde for most of the 20th century. In 1977 Kraftwerk found themselves bang in the middle of the bridge between those bygone European experimentalists and modern music culture. Their first records were made with regular, albeit treated instrumentation but in 1974, having purchased a new moog synthesiser, they arrived at ‘Autobahn’. It became immediately apparent they had invented a completely new form of electronic music that existed outside of the norm. Nonetheless, despite becoming a hit a year later, ‘Autobahn’ remained a mere novelty, the possibilities it opened up remaining virtually unexplored.

Kraftwerk’s long awaited breakthrough and the initial concept of Electronic Dance Music only truly arrived with ‘Trans Europe Express’. Released as a 12” disco record in the States, it coincided with Giorgio Moroder’s electronic production of ‘I Feel Love’ for Donna Summer and Space’s ‘Magic Fly’, two more formative European dance records that had been developed in total isolation.

The first to fall under Kraftwerk’s influence was a generation of punks disenchanted with the gobbing, cartoon strip their movement had become. Adding a synth to their armory may have been diametrically opposed to punk given the synthesiser’s dodgy prog rock connection, but as a statement it was equally if not even more radical, the perfect blueprint for rejection, not only of rock but also the musical foundations of all Anglo-American music.

The continually ignored Ultravox! were crucial precursors to the eighties electro pop explosion. Unlike American pioneers Suicide who put their short, catchy rock’n’roll songs through the electronic mincer, with their cold, European aura and John Foxx’s images of dehumanisation and decadence, Ultravox!, the Human League Vers. 1.0 and remarkable one offs like Daniel Miller’s The Normal, rejected rocks standard language completely. And yet they were just the tip of an increasingly big iceberg awaiting the Trad rock Titanic.

I suppose in real terms, despite all this furious activity, post punk electronica didn’t really kick off until June 1979 when Gary Numan’s Tubeway Army hit the top of the charts. Reviled by critics as an inauthentic Bowie clone (in 1979 authenticity was everything), much to their disgust he went supernova, adored by legions of teens and a handful of futurist genre creators as far afield as Detroit, Chicago and the Bronx who all identified with his immaculate machine tooled songs of alienation, loneliness and despair.

There’s no question that Numan heralded the arrival of electro pop’s first phase. Lifted directly from the Kraftwerk masterplan, it explored feelings of isolation, urban instability and an overriding sense of paranoia. In the post punk underground that meant Cabaret Voltaire and Throbbing Gristle while Numan was joined in the pop overground by John Foxx and the new Blitz kid/New Romantic movement led by Steve Strange’s Visage.

Predictably, the second phase of electro pop reacted against the first by following the early 80’s new pop aesthetic. Suddenly, rather than the Ballardian desolation of 70’s cityscapes, it began to evoke a bright, clean future, the songs themselves reverting to the usual pop territory of love and romance, escapism and poptastic optimism. The prime movers behind this rehumanisation were Phil Oakey’s Human League, Orchestral Manouvres, Depeche Mode and Yazoo. Soft Cell, with their warm blooded songs of torrid passion and seedy glamour, and Düsseldorf art school boys DAF, with their kinky, homoerotic image and a post-Moroder disco sound, were also crucial.

Sadly, for many success was fleeting as they were overrun by the multitude of clones and careerists who appeared in their wake. Thankfully, some notable innovators continued not only to survive but to flourish: New Order and Cabaret Voltaire embraced club culture as the logical next step; the Pet Shop Boys implemented their own singular vision of pop subversion and Anglo disco; the Art Of Noise, produced the kind of experimental power that would be reconstructed again and again, and Depeche Mode took their hardcore electro beats, S&M pervery and air punching misery into the stadiums and onto global mega stardom.

While Kraftwerks influence on the punk generation wasn’t entirely unexpected, the impact they and early electro pop pioneers like Numan, Ultravox!, Belgium’s Telex and Japan’s Yellow Magic Orchestra, had on black dance music came as complete surprise. Like many great records ’Planet Rock’ mixed creative vision with a dose of happenstance but within its seven plus minutes of futuristic synth funk built around two Kraftwerk samples lay the musical DNA that would create electro and move rap out of the Sugarhill age. And Bambaataa wasn’t the only one under the influence.

Cybotron and then Model 500 were formed by a suitably inspired Juan Atkins and it was his early records, allied to his creative partnership with Derrick May and Kevin Saunderson, that signaled the birth of Detroit techno. Much like Kraftwerk, techno celebrated the romance of technology, utilising electronic machinery to forge its own aural vision of the future. Incredibly, that same scenario also played out in Chicago. Isolated from the mainstream, DJ Frankie Knuckles and jazz fusion muso Larry Heard (who’s first drum machine came from Derrick May), revived disco and merged it with all things electronic to soundtrack Chicago’s burgeoning gay scene. The result may have been naturally funkier and more soulful than techno but it was still futuristic, ‘Washing Machine’ a clear pre-cursor to the bubbling, liquid groove of Acid.

Bambaata, Atkins, May, Knuckles and Heard may have been the most prominent game changers but there was also a handful of equally influential yet obscure one offs, some of which actually pre-dated the big boys. Ryuichi Sakamoto, A Number Of Names, Alexander Robotnik and Sexual Harassment may have come out of nowhere, made their mark, and then disappeared, but they still played a part in electronic dance music’s pioneering years; the building blocks for everything we now take for granted.

The electronic music virus had finally broken loose, so much so that by 1985 it was presenting itself as a paradox of possibilities. In its many new forms electronica had proved beyond all doubt that within technology there could be real emotion and within machines there could be real spirituality. All the old fear and distrust of synthphobic rockers had been blown away. There could be no escape.