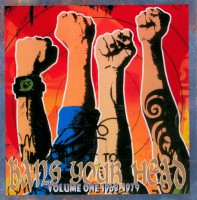 Here’s a confession. Heavy metal has never been on my radar. Deep within the punk zeitgeist it was never ever an option, epitomising everything we were intent on blasting to oblivion: Long hair, stadium shows, guitar solos, blah, blah, blah.

Thus, Bang Your Head has been a voyage in uncharted waters, ending with the surprising conclusion that perhaps within this genre are the true outsiders. Ridiculed, hated, feared and banned by the moral majority, particularly in the land of the ‘free’, heavy metal has fought the struggle for survival like no others. And one thing I never realised was how hard rock bands from my early teen years like Zeppelin, Montrose, Nazareth, even Thin Lizzy, were integral DNA in the eventual spawn of the beast and all its parts. It’s been a long, ear splitting ride so let us begin.

Once upon a time there was no such monster as heavy metal. Whether the words themselves were corrupted by William Burroughs, Lester Bangs or John Kay of Steppenwolf’s ‘Heavy metal thunder’ line in ‘Born To Be Wild’, who cares? What’s for sure is that without Black Sabbath the phrase was a pure accident of poetry for they embodied a revolutionary new dawn. On Friday the thirteenth of February 1970, their self titled debut LP was released, the first complete heavy metal work by the first heavy metal artists. A resonating echo from long ago, the music dramatised the conflicts of humans on earth as epic struggles. The entire ceremony sounded the death knell for the music known as rock’n’roll, which ever after would merely be the domesticated relative of what was to come.

Black Sabbath gave birth to heavy metal and its entire bastard offspring. Sometime in the future it would double in intensity and become power metal, then twist into thrash metal. From there it would cross paths with other forms to spawn black metal, and then create the unbelievable refinements of death metal before fusing with every other sort of music, finding itself perpetually reborn. Enduring over three decades of Marshall Amps, guitar holocaust, and drum destruction, Sabbath remain the bedrock, the heavy stone slab from which all heavy metal eternally rises.

During the formative years Sabbath shared the moonlight with Led Zeppelin and Deep Purple. Zeppelin were the epitome of 1970s blues based hard rock and a massive influence on the new breed. Their every gesture was grandiose, Page, Plant, Bonham and Jones demanding kingly attention. Hammer of the Gods indeed. In contrast Purple were a tremendous organ driven force with state of the art heaviness. Their power dimmed in 1975 when Ritchie Blackmore formed the mythically inspired Rainbow, recruiting the young Ronnie James Dio, another name set to lead the way in the early years.

Far more extreme was Alice Cooper who laid some theatrical foundations with a gruesome blood soaked stage show. Intensifying his efforts, Kiss took their make up and glitter image to the doorstep of Mr and Mrs America, emerging as superstars. Like AC/DC, who had to come to Britain for recognition, they compressed the biggest sounds of the past into bite size anthems.

Aerosmith and Thin Lizzy remained as hard rockers, soon to be pushed aside. But, the birth of heavy metal as a fully fledged movement arrived in the twin guitar assault pioneered by new disciples, Judas Priest together with the older, more experienced Scorpions and UFO, the twisted punk rumble of Motorhead and finally Van Halen, struggling alone in Los Angeles against the tide of disco.

All were longhaired and loud yet long after their time had passed heavy metal remained indebted to their large-scale displays of volume, courage and refusal to follow any rules but their own. This was the age of myths when legends were born, yet it was still just the beginning, soon to explode with devastating effect.