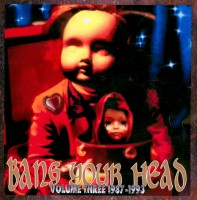 By the mid 1980s heavy metal was mutating at remarkable speed. Hardcore and metal troops were a natural alliance as bands like Hare Krishna punks; Cro-Mags embraced the same spirit. The Big Four of Metallica, Anthrax, Megadeth and Slayer had always displayed a hardcore allegiance but continued to stick with the relatively new thrash metal maxim. Metallica’s first priority was to rule the metal world, an enormous thriving realm, and their weighty And Justice For All shipped to colossal response, despite a deliberately impaired bass free mix.

The heavy metal generation was growing up and even the big hair glam scam was changing, Guns’n’Roses breathing new life into the bloated corpse and dragging the bluesy Cinderella and Bon Jovi protégés Skid Row with them. But, American metal heads began forsaking bands that admired themselves in the mirror to seek the substance and realism found in James Hetfield’s patented scowl. Nonetheless even second ringers like former Mercyful Fate vocalist King Diamond, Germanys cartoony Helloween, Seattle’s reinvented Queensryche, trad metal sword bearers Manowar and San Francisco thrashers Exodus crept around the arse end of the American charts.

The unexpected success of Metallica widened the focus to embrace alternative metal hybrids like The Cult and grunge upstarts Soundgarden. Even the metal bible Kerrang! reviewed its mandate putting the old order of Iron Maiden, Saxon et all out to pasture. The towers of heavy metal tradition crumbled to the vibrant thrash of a brave new world. As its ambassadors to the world Metallica took metal to a new level of respectability but still sought new sacred cows to burn. Clearing away the thrash metal bombast they took up the strenuous task of translating their trademark sound to the universal language of rock’n’roll and delivered their new testament, Metallica - the black album. Overnight America turned into a nation of head bangers, from middle-aged executives to cowboys, from college jocks to waitresses.

Metal became so commonplace it formed the backbone of the complex musical landscape as bands of every type grew long hair and plugged into standard issue Marshall amps. Chicago synth duo Ministry were a dramatic example, growing beards and loading samples with powerhouse guitar sounds pinched from Slayer. They were no less thrilling for that though. Infact, digital sampling opened up yet more unexplored regions, giving keyboards a greater slice of the action as in Type O Negative’s gloriously gloomy merger of metal and gothic doom or Dream Theater’s own unique progressive/art metal direction. The key to survival was adaption and transformation in an overexcited musical world, Pantera being one band who smartly rode the changing tide, synthesising metals abrasiveness and raps sparse structures. Late arrivals Rage Against The Machine were another with their revelatory hybrid of monster riffing, knotty hip-hop rhythms and sheer fucking anger.

Of course Metallica soared above the fray, their global success eclipsing any trends. With all they had achieved, the passionate cause of inspired metal had finally fulfilled its righteous destiny. Artistically, for Metallica at least, it was the end but for heavy metal the story was far from over. Throughout its rising fortunes there had always been an active underground. The mass changes of the late eighties/early nineties had left space in the heavy metal scene that could never be filled by alternative metal bands, metal rappers or grunge martyrs. Even more new breeds would spawn from the beast.

Rather than simplify for mass acceptance, Metallica’s nemesis Slayer had turned to the darker unspoken aspects of humanity. Legions of new fans streamed into their deep cellars to discover a strong undercurrent had developed. The cult monster of black metal, crudely sketched by Venom in 1981 but with foundations built by Slayer and Sweden’s Bathory in Europe, mutated into death metal. The final traces of heavy metal that still resembled trad rock were obliterated forever by the new masters, Death and Deicide. A largely American monster, there were still overseas exponents like Brazilian heroes and former black metal protagonists Sepultura. A drastic new breed of the metal gene, death metal removed any hint of melody and was universally feared yet mocked as extreme and ridiculous. But as much as thrash metal was a substantial second wave so death metal represented a third evolutionary stage. While other more acceptable sub genres were gathering momentum similar to Trouble’s retro doom movement, death metal, to the dismay of many, was set to grab the largest slice of the future.