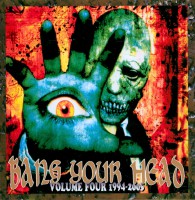 After years skulking around the underground, death metal was selling hundreds of thousands of albums to the dedicated hordes during the mid nineties. British bands finally returned to the frontline, Napalm Death synthesising their early grinding assault with death metal while Carcass produced Heartwork, a standard setting achievement, infact the Metallica black album of the genre. Meanwhile, another Napalm Death splinter, Cathedral, tied together all shreds of doom and gloom to awesome effect.

While death metal proliferated and super stimulated true believers, bands found they could survive nicely with just a core audience. More tuneful thrashers Prong proved major record companies were listening but they were the exception. While American and European death metallers like Sweden’s At The Gates and Switzerland’s Samael went adventuring across the globe, Brazils brilliant Sepultura flew in from their cultural backwoods to become the international success story of the decade.

The differences between metal sub genres were still huge barely registering with the mainstream except when lumped together. Even as death metal destroyed frontiers, a cadre of violent and ultra serious bands resurrected black metal, pulling the eye of the storm to the frozen wastes of Scandinavia. Norwegian black metal was much faster and orchestrated than death metal, the bands hidden in the northern darkness away from any outside influence. Inspired by Mayhem and passed on by Emperor, Dimmu Borgir and Immortal, this dark scene soon became entwined in the feuds of Norway’s terrorist dramas. Living on the very edge of sanity the highly articulate musicians willingly became involved in murder and the burning of Norway’s most sacred and ancient churches. The members of Mayhem alone deserve a chapter in heavy metal scriptures. Vocalist Dead took his name to the extreme and committed suicide, his shattered skull collected by guitarist and founding father Euronymous for an attractive necklace before he himself was stabbed to death by bassist Varg Vikernes. Thus, in a misguided way did Norwegian black metal become the revolutionary force that rock and roll had always wanted to be? On the other hand, having been to Norway myself, they were probably just bored out of their fucked up minds.

Death metal raged, black metal burned and good old fashioned classic metal continued to sell. And yet despite the media spotlight moving elsewhere, a new focus was still needed. Even as black metal incited and inspired the underground, others took inspiration from their immediate environment, technology playing its part as alternative outsiders White Zombie and Beelzebub himself, Marilyn Manson, introduced electronic elements to their roaring morass of sound. The original antichrist Ozzy Osbourne used his considerable influence; the Ozzfest shows casting a symbolic seal of approval on an adventurous pack of youthful newcomers. Dubbed ‘nu metal’, Korn, the unconventional Coal Chamber, Papa Roach and later hybrids, Tool, American Head Charge, The Disturbed and System Of A Down put a stylish face on the endless, undying need for revolution. Starting under the influence of rap and bands like Faith No More, themselves moving onto uncompromising rage from their funk roots, nu metal shared some qualities with death metal but was far more accessible, reinvigorating the genre for a new generation. The ultimate bridge between the old and nu were Slipknot who retained the whirling chaos of their death metal roots, cleaned up the growling vocals and so increased their potential audience tenfold. The old guard took advantage with every major band from every metal era reuniting from Black Sabbath to Motorhead to Mercyful Fate. Of course some like original San Francisco thrashers Testament had never gone away.

In the new millennium the creatively booming areas of metal are often revivals and adaptions of resurrected sub genres. Power metal, legacy metal, retro metal, call it what you will is a largely European phenomenon located somewhere between the pompous frills of ‘The Final Countdown’ and a melodic Iron Maiden on speed. Through cult acts Iced Earth, Nightwish, Children Of Bodom, Primal Fear, Kamelot and Edguy the spirit of sword waving heavy metal has survived intact. However, more melodic and experimental death and black metal remain the dominant force with American bands like Hatebreed and Killswitch Engage, and Swedish bands Arch Enemy, Soilwork and Mors Principum Est. But there are still a million splintered shards from squatter punks Superjoint Ritual featuring no less an oddity than country boy Hank Williams III, to satanic Portugese doom merchants Moonspell, and from Southern stoner rockers Clutch to the stunning blend of dark, epic metal that is Irelands Primordial.

Of course in the future heavy metal will surface in barely recognizable forms. What happens next can be left to today’s bawling infants who will take what they wish from the long raging legacy, leaving what remains to dust. As we stare into infinity, the void beckons and heavy metal tempts its edges. What an amazing trip it’s been this far!