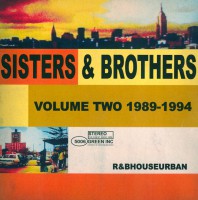 13 YOUNG DISCIPLES / Get Yourself Together / Single A Side September 1990

1 SOUNDS OF BLACKNESS / Testify / The Evolution Of Gospel June 1991

House never did take over the world or even America, its influence far outweighing its popularity even though contemporary R&B, apart from the Jackson droids and Prince, remained a moribund morass of bland upward mobility. Hip-hop was ruling the streets and the clubs but not the radio so producer Teddy Riley seized the opportunity to bridge the gap but everything about his New Jack Swing offended the sensibilities. Nonetheless, it still sold in its millions, opening the floodgates for a deluge of glorified Chippendales causing hip hop crews to refer to R&B as ‘rap and bullshit’. And they weren’t wrong.

For the disillusioned, a viable alternative could be found in British soul and Acid Jazz. With a combination of genius marketing, a good catch phrase, some great tunes and innovative production, Soul II Soul managed to take their own agenda into the marketplace rather than being dictated by it. They were emblematic of the optimism accompanying the final years of Thatchersm and the first truly credible British soul band which encouraged great eclectic records by Neneh Cherry, The Chimes, Omar, trip hoppers Massive Attack and even Lisa Stansfield. Gaining confidence from all of these acid jazz developed from a jazz dance, rare groove scene. Unfairly dismissed as retro fixated, the Young Disciples released two of the finest singles to go beyond the acid jazz enclave, and the Brand New Heavies and Galliano helped it embrace hip-hop, techno and house.

Of course, back in America, all black British music was ignored so R&B’s dilemma remained. To sell records and uphold black values of being successful, no artist could possibly be authentic. Ironically, that approach had worked so well that by the end of 1992, almost a decade after Thriller, with rock and pop on the slide, R&B had become so dominant that it had become the mainstream. And yet, propagated by hip-hops realism, there was a creeping discontent within the ghettos and the housing projects, a feeling that R&B artists had become so absorbed with aspirations of success they had abandoned their black fans and disowned their roots.

In New York, a new black and proud, hip-hop soul approach germinated, and Mary J. Blige emerged as the female singer of her generation. She was true ghetto fabulous, a tough chick from the streets, the real deal. But somehow she was able to display the pain and vulnerability beneath the street sass and hyper sexuality that had become the image of urban femininity. Mary J. Blige took ghetto fabulous to the mainstream where it transcended the whole notion of authenticity and even transcended notions of black aspiration.