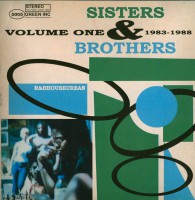 4 BRASS CONSTRUCTION / We Can Work It Out / Conversation May 1983

6 MARSHALL JEFFERSON / Move Your Body / Single A Side March 1986

In the seventies, soul had been the soundtrack to black American life but by the early eighties it was in a very strange place. Without the political gravitas that had come with civil rights, and without any superstars, it had become obsessed with selling itself to the mainstream although that would demand a very different type of artist.

Thriller changed not only the rules of the game, but the shape, slope and size of the playing field, while ‘Billie Jean’ and its video killed soul stone dead and invented R&B. All on his own, Michael Jackson kicked down the walls of inherent corporate racism so R&B could enter the mainstream, forever changing the black = soul, white = rock split that had been the foundation of American pop for over 30 years.

Sadly, post Thriller R&B stank big time. Just think Whitney Houston or Luther Vandross. Over produced, synthetic, cynically escapist and eager to please, eighties R&B became so devoted to racial and generational crossover and the lure of the dollar, that it lost any feeling of roots, relevance and rebellion. You had to dig deep to find any records that weren’t just syrupy mush although that made the ones that did stand out all the more heroic and poignant.

Throughout the eighties, the only artist to give R&B any real credibility was Prince, who took it to the conceptual high ground before hip-hop dismantled it altogether. In an era of faceless corporate soul, Prince was the only artist able to synthesize his influences into an original vision. Perhaps more importantly he was the only black performer to address the hopelessness and spiritual desolation of the Reagan years.

From the mid-eighties on, R&B was so bad that in Chicago, Detroit, New York and Britain, it began to be usurped by the return of disco, otherwise known as House. This time around it was deep and raw, incorporating sparse synthesised European sounds and early electro dub effects. Together with Marshall Jefferson, Frankie Knuckles was one of the new scenes prime movers, its very name, inspired by his residency at Chicago’s Warehouse. Of course House rapidly morphed into a myriad of rave and electronic sub genres but garage or deep house remained faithful to the spirit of seventies disco soul. It was easy to link all the original house anthems, from ‘Promised Land’ to ‘Can You Feel It’, from ‘Move Your Body’ to ‘Big Fun’. For a moment it looked like House might even take over the world.