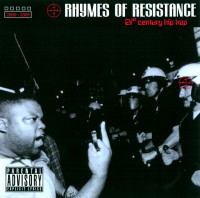 In the early years of the 21st century, the resurgence of mainstream hip hop continued with the Elvis like phenomenon of Marshall Mathers selling over 50 million records, mainly from chain stores in the suburbs to middle class white kids lusting for rebellion. The irony that his career was being overseen by Dr Dre, once of gangsta thugs supreme NWA, was not lost on anyone.

By the time Eminem got to take over the world, hip hop had become a very corporate beasty, which by association took away some of its purity although there was always someone only too happy to balance the lack of love for the art and the effort of innovation. Eminem did both with ease but hip hops new reputation had not been forged by him alone. Infact, it had largely been driven by the Dirty South; cities like Atlanta, New Orleans, Memphis and Houston; producers like Timbaland and the Neptunes; MCs like Ludacris, Missy Elliott, Three 6 Mafia, Clipse, Talib Kweli and Lil Wayne.

Naturally, underground fans sniffed at such a brash, bolshy sound and the plethora of crossover hits with straight R&B pop choruses they saw as selling out hip hops original ideal of showcasing MC virtuosity. But it was far too late to worry about such things. Even as mainstream hip hop was stealing from R&B, R&B was stealing hip hops street suss and attitude. Before long the genres were almost indistinguishable from each other, a fact neatly symbolised by the union of the great King Rat Jay Z and the Queen of R&B, Beyonce. Suddenly, with those two leading the way, black music became more about the brand and transmedia empire building than the beats. Hip hop became just one in a multitude of brain numbing, soul crushing leisure options before Nas, the most credible hip hop artist for over a decade, solemnly announced ‘Hip Hop is Dead’.

Now while I can’t help thinking Nas’s tongue was firmly in his cheek, that one record kicked up such a storm every major hip hop artist, critic and part time B boy felt the need to respond. But it did kick off a healthy debate on the state of hip hop. Having been a commercial proposition for over 25 years, a long time for any genre to stay relevant, 2006 seemed as good a time as any to pronounce the death sentence.

There is no doubt that the vigour and invention of the first few years of the noughties had made the rest of the decade sound stale and fatigued. Instigated by the new urban R&B mash up it was an indisputable fact that hip hop was no longer irrigating the mainstream with new beats and styles or producing major album statements, give or take an 808’s & Heartbreak. It had even stopped coming up with compelling new personalities, the last being Kanye West and Lil Wayne who’s ‘A Milli’ was one of hip hops last great songs.

For the final years of the noughties, hip hop was a desperately unmemorable procession of production line robots with lyrics trudging a hedonistic treadmill of bling and booty, punctuated by the occasional inane dance craze. Even the sound of hip hop, always its saving grace in the absence of political engagement or MC as poet depth, had deteriorated. All the odd angles and eerie spaces had been flattened out, replaced by portentous digi synth fanfares, plastic autotune and lumbering beats, pre-degraded to sound good on YouTube and mobiles. The underground too stopped imposing itself on the consciousness. Like the lo-fi indie it so often resembled it puttered on much like it had through the nineties, odd flashes of genius like Cannibal Ox, Quasimoto, Madvillain barely causing a ripple in the outside world.

Now, I’d never say hip hop really is dead because no music ever truly dies yet most would admit it is doing a fairly good impersonation of being terminally ill. What hip hop taught me, like no other music before or since, is that it can be the most thrilling noise there is but judging by its output in recent years, it's now a deadening force as a listening experience even though it continues to hold in awe the musical imagination and personal ambitions of Black American youth.

Given past forms like jazz, rhythm and blues, funk and house, I doubt very much that they have no more surprises up their sleeves in terms of future sound and style, but it could well be that the next big thing will never arrive until they tire of hip hop, throw off the shackles of those three decades of history and turn against it. Only the future will tell but here’s hoping.