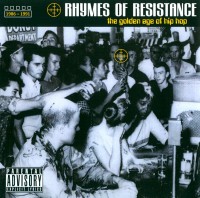 While Run DMC and LL Cool J consigned old skool to the dumper and Schooly D hinted at a gangsta future, the Beastie Boys signalled the start of white frat boy punk, an unlikely union of meathead macho and boho cool. In an era dominated by a lust for the dollar they were a bit of light relief in some heavy duty times. Riding in on the back of their Def Jam label mates they too put all their faith in Rick Rubin to become pop rebel faves for an entire generation of white adolescents. In fact, some white fans invested so much belief and passion in hip hop they were left with the unenviable task of grappling with all the complex issues of being white acolytes of a music largely made by and for blacks, although of course that didn’t apply to the Beasties.

As a result, hip hop became so enabled it made the leap from its cult scene/novelty pop past to fully fledged art form and million selling records. Led by Public Enemy’s flag bearing radicalism, Erik B. & Rakim's scratched up retooling of the early seventies and EPMD’s (Erick and Parrish Making Dollars) stoned, somnambulist swagger, the leap in quality and depth laid the foundations for a hugely creative golden age, the new superstars joined by inspired one offs to create a period where black consciousness and rebellion met pure party pleasure.

The importance of Public Enemy, not just for hip hop but for modern music culture was crucial. They weren’t just hip hops political wing or ‘the greatest rock’n’roll band in the world’ in the absence of any rock band worthy of that title. Their true greatness ran far deeper than that. Chuck D possessed an unprecedented vocal authority, a statesman like strength and uber masculinity that made his gibberish, of which there was plenty, sound as indefatigable as his wisdom. It was his complete belief in the message that made Public Enemy the revolutionary force no government could hold. At least that was the dream; a group so stunning they made you believe anything was possible.

Incendiary, fast, loud, rabble rousing and panicked, tongue twisting and full of incredible metaphors that remain undeciphered, their noise was something we’d not heard the like of before. And yet by 1991, after A Nation Of Millions and Fear Of A Black Planet, two of the greatest albums of all time, even they were deserted by their black audience, written off as nothing more than an exotic black Clash, token rebel rockers full of mere rhetoric and hollow gesture. With a cruel sense of irony, their only audience to remain loyal was white.

Public Enemy’s fall from grace inevitably left a massive creative hole to fill. For a while the Native Tongue consciousness of the Jungle Brothers, De La Soul and A Tribe Called Quest was enough to reinforce a belief that hip hop was going to get even more crazy, druggy and progressive. It was a time to get happily stoned while pondering the whys and wherefores of a new multi racial bohemia.

The fact that this new bohemia failed to materialise and hip hops time as revolutionary music within the mainstream came to a shuddering halt was all down to one record. NWA’s Straight Outta Compton was, indeed it still is, a fucking horrible record, that expressed pure loathing for women, gays, pacifists and anyone else that believed in any form of unifying morality. That it was also the stoopidest thrill funk album of all time was unfortunate, but on its own it prompted hip hops slow descent into mean minded machismo, dangerous feuding and sexual and political conservatism.

Following the extraordinarily creative and commercial golden age there had been a strong belief that hip hops new disciples would accept almost anything, the more out there and experimental the better. Straight Outta Compton caused arty, progressive albums like Son Of Bazerk to bomb and it became very obvious, very quickly that the cutting edge was no place to be. How could it when gangsta’s right wing misanthropy had already brainwashed young hip hop and rock fans into believing that all they really wanted were bullshit fairy tales of black men dying and black women being abused all over a beat sounding exactly the same, track after track after track. The onslaught of NWA kicked off another hip hop bandwagon but whereas in the past most bandwagons had rapidly ground to a halt, this one picked up so much speed down its dead end street that there could only ever be one ending.