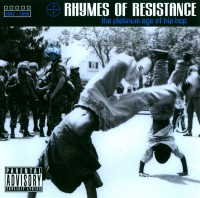 In the golden age the most popular artists had also been the most vibrant. Despite different approaches, and without even knowing it, they had all worked together in a common cause to raise awareness of the black experience and create a heady brew that made hip hop so important to so many. But with the arrival of gangsta that mentality changed dramatically.

NWA’s records detailed a hardcore lifestyle of drugs, sex and violence, sensationalist stuff exploiting sales to black and white teens. Almost immediately, and much to their own delight, the music biz corporations were able to sideline the politically sussed radicals who had been a thorn in their side and start a desperate search for NWA copyists to cash in on the opulent wealth splashing about.

No one seemed at all bothered about hip hops misguided belief that violence and intimidation were the only way to achieve self determination in the white man’s world. Following the lead of Ice T, Ice Cube and Cypress Hill, rappers began to encapsulate every brain’s in their balls, drug, thug, racist stereotype known to The Man, which in turn raised the stakes in a lethal East coast-West coast conflict by turning it from quality of music and insult into gun toting macho dare. Following the mega success of Dre and Snoop Dogg, hip hop's new direction was written in blood, often literally.

The origins of gangsta rap can easily be tracked back to the sudden proliferation of crack in the late eighties significantly changing the values of black youth. That's where the rampant materialism, the guns, the rampant sexism, homophobia and diehard mentality for meaningless things came from, like the ugly platinum baubles MC’s decorated themselves with. Of course, in truth everyone knows that the lives of crackheads and drug dealing gang members are desperate, miserable existences but predictably they were glorified and romanticised by MC’s who more often than not were middle class college kids with no experience of such things. Obviously, not all black kids were slinging down crack or smack, or blowing each other’s brains out, but if you listened to hip hops exploitive lies you’d never have known it.

It was around then I realised hip hop wasn’t going to be the benign revolution we’d all hoped for after all. Even so, it was still tough to judge what the worst thing about it really was. Was it the rappers themselves, the Mafiosi styled moguls and hangers on, or was it the rap fans and media jerking off all over the bitches, guns and bling bollocks? I’d never really been that interested in the sociological, socio-political, academic view of hip hop and its place in popular culture before but in the 90’s it was impossible to turn a blind eye.

Ironically, while hip hop had turned into a grim old business, if you ignored the mainstream there was still plenty going on. The only upside of gangsters popularity was that hip hop had become large enough to support a viable underground where artists like Arrested Development, KRS One, Black Moon and Jeru gave it a place and meaning. And they were doing it with an understanding that rhyme culture was all about intelligence, rising above rather than revelling in the shit by boasting about the size of your gun or your cock. It was a template for musicality that dismissed the reliance on familiar hook lines stolen from well known tunes and discussed sex without demeaning or patronising women. In the mid nineties that was revolutionary in itself but also let us know that Cypress Hill, Dre and Snoop Deputy Dawg weren’t the only option if you dared to be different.
Gradually, the creative emphasis began to shift away from LA back to New York where it had all begun. One landmark record was the legendary debut of one Nasir Jones from Queens. In the wake of the Wu Tang Clan’s menacing soundscapes, Illmatic was hailed as a second coming, its articulate, politically aware reportage over dense, scratch reviving beats being everything hip hop had always meant to be. The tide had begun to turn yet ultimately it was the rise of the South that sparked a major resurgence in hop hops credibility and finally sounded the death knell for the East-West conflict that had claimed the lives of Tupac Shakur and Biggie Smalls.

Timbaland and Missy roared in with a far different kind of black charisma, one that outshone and out funked hip hop itself and made it’s obsession with darkness, tension and paranoia, and fetish for ‘keepin’ it real’ seem suddenly out of step with the good time zeitgeist. In one move they dragged hip hop away from its reliance on sampling and back to electronics and experimentation which inspired a late nineties resurgence combining neat hooks, jagged rhythmic innovation, glitzy entertainment and edge. And let’s not forget a trailer trash white kid from Detroit who was already causing a ruckus with his spectacular rise and the contradictions it presented.