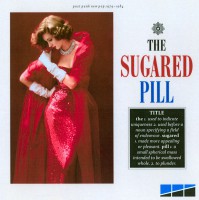 It could be argued that the true harbingers of New Pop were M’s ‘Pop Muzik’, #2 in May 1979, and The Buggles ‘Video Killed The Radio Star’ ,#1 October 1979. Both songs embraced the possibilities of new technology; both were exercises in hyper production and insane catchiness; both exploited video to the hilt and crucially, both were exercises in pop about pop. The Buggles came from outside the punk narrative so don’t feature here, but M, or rather Robin Scott, had close connections to McClaren and Adam Ant, which is why they do.

If new pop had an architect it was Paul Morley, NME writer supreme at a time when the weekly music press mattered more than ever. In December 1980, reacting against post punk’s percieved miserablism and doomy seriousness, Morley called for an ‘overground brightness’ to ‘bring life back to the radio, to make the single count’. In reality of course new pop, even if it hadn’t been defined as such, had already emerged in various disjointed strands of post punk; in the early electro pop of John Foxx, Numan, and OMD; the Postcard Records indie pop ideal; the New Romantics shift from punk reality to escapism; the Big Music of The Bunnymen, U2 and Simple Minds; in Malcolm Mclaren’s playful celebration of sun, sea and cassette piracy.

Suddenly, following Morley’s manifesto, the ‘pop’ word was everywhere and groups began to espouse the healthiness of pop, rather than the darker conditions of post punk. Thereafter, the peak of new pop came incredibly quickly, a horde of new pop terrorists siezing control of the mainstream in a glorious 18 month stretch between the Spring of 1981 and the Autumn of 1982, non stars went supernova if only for a minute,  innovation went down with a spoonful of sugar and all the old babies were thrown out with the bath water.

To varying degrees all of these new groups had grasped the importance of image, its power to seduce and motivate, and they had all coated their music in a commercial sheen, some pursuing a ‘sugared pill’ strategy while others revelled in sonic luxury for the sheer glam thrill of it all. While on the surface they may have appeared as a ‘punk never happened’ scenario, a retreat into escapism, they were infact furthering punk’s original mission albeit in a much transformed context.

New Pop sounded utopian and it was, but like most utopias it sowed the seeds of its own destruction. In the early months of 1983 there was a dawning sense that the new dream had already turned sour. The creative bright sparks who had pioneered it all; ABC, Human League, Soft Cell, The Associates, had been displaced by the clones, careerists and opportunists who weren’t ideas or ideals driven, and had little or no connection to punk. The utter deluge of  Wham’s, Culture Club’s, Flock Of Seagulls, Kajagoogoo’s and Tears For Fears diluted the impact and new pop became too shiny, too false, and too meaningless, chiming with the ‘I’m alright Jack’ philosophy sweeping the nation as advocated by Thatcherism.

In the end, new pop’s ultimate prank as well as its ultimate undoing came from Frankie Goes To Holywood. An apocalyptic gay disco army, they were new pop with a punk hard-on, yet their reign would be shortlived. They were far too intense and brazen for Thatcher’s children who, once again began to feel the comforting pull of terminal mediocrity. All of a sudden Howard Jones, Nik Kershaw, Paul Young and starving children in Africa seemed a much safer bet.