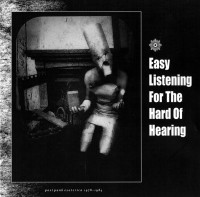 In the 21st century it’s tempting to think of post punk as just the angular agit-prop of the Gang of Four, the ominous angst of Joy Division or the new pop sensibility of ABC. Of course, in reality it was never as clear cut as that but what these groups and post punk did do was open our ears to a wide range of sounds and records so far off the dial that they continue to be missing from the radar even now. It’s easy to understand why, because they were the experimentalists, the art terrorists, pushing themselves far beyond all recognised boundaries into the unknown. Inspired by the harsh, forbidding landscape and uncertainty of the times they were the most radical of them all.

Esoterica’s first flowering in contemporary British music was seeded in industrial culture with Throbbing Gristle and Cabaret Voltaire its parameters. They did not as is often supposed celebrate industrialism, rather they were the bridge between its end and the coming of the computer age. A full decade older than their associates, Genesis P. Orridge and Throbbing Gristle were resolute non musicians, their noisescapes hugely unlistenable but their manifestos and visuals, piling horror upon horror upon horror, grimly thought provoking. On the other hand, Cabaret Voltaire despite maintaining a more distant approach were far more listenable, concentrating on mechanical repetition, loops and muttered vocals. Both Throbbing Gristle and Cabaret Voltaire’s methods were incredibly influential, techniques they perfected proliferating promiscuously.

But esoterica, as the name itself suggests, wasn’t just about earnest industrialism. It included a whole spectrum of styles and ideologies from around the globe; from Material’s New York no wave funk to Rip Rig and Panic’s Bristolian freeform punk jazz; from Belgiums Honeymoon Killers art pop experiments to Eastenders Test Department’s sturm und clang; from Berliner’s Einsturzende Neubauten’s delight in discovering how much sense could be made from the chaos of power tools to Yugoslavian Laibach’s totalitarian thunder.

Much of the esoteric aesthetic proved challenging and difficult because an adventurous imagination could not easily be transcribed in 4/4 time with regular instrumentation. To realise completely the music struggling to escape their heads, groups had to look way beyond the norm. And even though the results were often harsh and brutal, among the ugliness and the chaos it was always possible to find a rare beauty free of commercial demands and audience expectation. It was pure, indefinable aural art that deserved more.

If there was any justice in this world, Fad Gadget would have celebrated five platinum singles and Foetus’s Clint Ruin would have been a fully loaded rock star mobbed by teenage girls. I loved them all regardless, most of these recordings educating me in non-music related art, literature and -ism’s that opened my mind and my ears. Forget the Gang Of Four, Joy Division and ABC, herein lies the true underground, the real songs of the free.