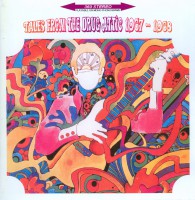 1966 had been the real Summer Of Love. One year on, with San Francisco a worldwide media phenomenon, 75,000 tourists, dropouts and teenage runaways invaded Haight Ashbury, all with flowers in their hair, desperately seeking the beautiful people. But the neighbourhood was nothing like the utopia of old. Rape, beatings and drug burns were commonplace, precipitated by speed and heroin, the new drugs of choice that would decimate the community. Just as the Haight reached its nadir, George Harrison deigned to visit for the first time. Stoned and disorientated he was shocked at the hideous, spotty junkies who confronted him aggressively and made a rapid exit. LSD had finally been made illegal the year before and to commemorate the anniversary, a symbolic Death of Hippie ceremony was held on 6th October 1967. The hippie era was over, at least in San Francisco. It had lasted little more than two years.

Unlike their British counterparts, by the time most American bands hit the studio, psychedelia was in its death throes. The Monterey Festival had legitimised the format while Sgt Pepper had legitimised the sound. The alternative had rapidly become the mainstream and the anti commercial spirit of psychedelia a contradiction in terms. Besides, the Bay area bands had gone in very different directions. The Charlatans had split up, the Grateful Dead had continued their commitment to the community despite being deep in debt and Jefferson Airplane became traditional rock stars with all the toys they desired. The most radical politniks of them all, Country Joe and the Fish, never recovered from a national ban following a festival appearance when they inserted ‘Gimme a F-U-C-K’ in the ‘Fish Cheer’, and Quicksilver Messenger Service were so laid back they couldn’t be arsed to promote their debut album. Careerist, acid-light ex-folkies the Beau Brummels and Sopwith Camel were only too willing to fill the void and seize their moment and who could blame them.

Los Angeles, with it’s more accessible, if slightly sinister brand of psychedelia, soon overtook San Francisco as the major music city. The Byrds, The Doors, Buffalo Springfield and Love had all transformed the former pop capital. More of a cult but no less influential were the Electric Prunes, The Seeds, led by the certifiable Sky Saxon, the West Coast Pop Art Experimental Band, Strawberry Alarm Clock, graceful ex folkie Tim Buckley, the bizarre Captain Beefheart and the avant-garde United States Of America. The Doors themselves were bonafide stars but love and peace was never on Jim Morrison’s agenda as he captured the lurking malevolence encroaching on LA’s good vibrations, Morrison himself morphing into the leather clad lizard king.

Over here London was still swinging in its commercial, Carnaby Street way, the ripples from the Beatles artistic splash soaking everyone from artists to clothes designers to musicians. Following their infamous drug bust, the Stones cut their prison song ‘We Love You’ as a clear fuck off to the establishment then half heartedly followed in their rivals psychedelic footprints with Their Satanic Majesties Request. Similarly Pete Townsend briefly swayed under the influence although The Who at least never lost sight of the potency of aggression. Not so ex mods the Small Faces who left muscular R&B behind to dabble in psychedelia, cutting one of the greatest acid pop singles of them all. And they weren’t the only ones as a slew of long established beat acts rendered obsolete, reinvented themselves overnight. The Move, a bunch of beer swilling Brummie oiks were the worst offenders but were still hailed by the baa-baa masses as flower power messiahs. The Herd with the doomy ‘From The Underworld’, Simon Dupree with the dreamy classic ‘Kites’, the Idle Race, Eric Burdon, the Pretty Things, The Nice, The Zombies and a multitude of obscure others followed a similar beat into psych path but nonetheless their records still retain the flavour of the times.

The hip and worthy stuff remained exclusively in the London clubs where bands like Tomorrow and the Fleur De Lys enjoyed healthy live reputations without so much as a sniff of a hit record. Inevitably, Jimi Hendrix had been lost to London after his triumph at Monterey but Axis Bold As Love maintained his superstar profile and still waved the freak flag high. The Pink Floyd were also building on their underground reputation, Piper At The Gates Of Dawn the most authentic psychedelic artefact of the era. Syd Barrett was the only one who took acid but then he took enough for the whole band. Infact, Syd probably took enough for the whole country and as early as autumn 1967 his mind was beginning to shred. Witness the unreleased ‘Vegetable Man’, his idea of a hit single!

1967 may have been a glorious adventure but the flame of summer optimism gave way to the harsh realities of an English winter and what the British media had jokingly dubbed flower power withered. Symbolically in March the Grateful Dead, hounded by the police, tourists and every nut in the Bay, moved out of Haight Ashbury. Then in April, following Martin Luther King’s assassination, race riots and looting swept across every city in America, including San Francisco. The tide had finally turned.