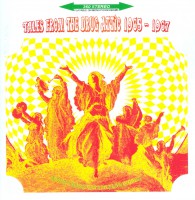 06 THE BEATLES / Strawberry Fields Forever / Single A Side February 1967

In 1965 the youth of America were still searching for an identity. The British beat invasion, headed by The Beatles and the Stones, had changed the way rock’n’roll was played while the American folk movement had changed the way it was perceived. The natural brew of politics and music would have a lasting effect, as rock became revolution. Socially there was already much change afoot sparked by the Vietnam war, social and racial repression and the rise of the Civil Rights movement, the influence of the fifties Beat generation characterised by Jack Kerouac, William Burroughs, Allen Ginsberg, and most significantly of all the introduction of mind expanding LSD by Dr Timothy Leary. A decade that had begun in dreary monochrome would soon explode into glorious Technicolor.

Psychedelia didn’t really kick off in May 1965 with The Byrds dreamy, narcotic version of Dylan’s ‘Mr Tambourine Man’ but because that moment is impossible to define, it’s as good a place to start as any. The Byrds euphoric, three minute rush charged the scrawny messiahs words with a youthful romanticism, encapsulating the pulse of the times. When Dylan himself went electric a few months later, the jingle jangle dawn of sixties rock had finally arrived.

The roots of San Francisco as psychedelic Jerusalem began when the beatniks, students, musicians and drifters found they could rent crumbling Victorian houses cheaply in a neglected neighbourhood known as Haight Ashbury. A new music scene was already germinating, aided by a Rolling Stones show in San Jose, but the first band to blaze trails into trippy realms of altered consciousness were the long forgotten Charlatans. In a return to authentic Americana they dressed as cowboy outlaws and riverboat gamblers and together with their followers took up residency at the renovated Red Dog Saloon in the old frontier town of Virginia City, Nevada. By the autumn of 1965 they had relocated to San Francisco with everyone else but their influence had already gone before them.

From that moment the transformation from underground community to overground phenomenon accelerated rapidly. A series of extravagantly titled shows and benefits were held at the Avalon Ballroom, the Fillmore and The Matrix, advertised with increasingly elaborate posters, and the newly named Grateful Dead became the house band for Ken Kesey’s Acid tests. But that was all a prelude to the biggest show of all, the three day Trips Festival, an orgy of sight, sound and LSD held in January 1966. The young continued to converge on Haight Ashbury and yet, despite the city giving rise to a lifestyle revolution, its best remembered for its key musical entities - the Grateful Dead, Jefferson Airplane (with ex Great Society singer Grace Slick on board), Quicksilver Messenger Service, Big Brother and the Holding Company, Moby Grape, Steve Miller Band and Country Joe and the Fish. Most of these early innovators met resistance from a record industry desperate to exploit the psychedelic phenomenon whilst failing to understand the soundtracks for ritualistic communal mindblowing that were the very essence of the age.

While San Francisco remained psychedelia’s shining light, particularly with the January 1967 Human Be-In, there was plenty going on elsewhere, albeit in a much darker context. The Red Crayola and the 13th Floor Elevators, the first band to call themselves ‘psychedelic’, came from Texas. The Fugs, the first stirrings of the Velvet Underground, The Third Bardo and Pearls Before Swine from New York. Frank Zappa’s Mothers, LA garage punk graduates The Seeds and Love, Kaleidoscope, Buffalo Springfield, Electric Prunes and most influential of the lot, The Doors from Los Angeles.

Across the ocean, Britain’s counterculture developed quite separately when LSD hit like a tidal wave in 1966. Notwithstanding Donovan’s work from late 1965 or one time mods The Creation, our psychedelic pioneering came largely from The Yardbirds, but the most noticeable change arrived with the release of the Beatles ‘Rain’ and Revolver, the first fully formed British psych creations. Any American influences were soon forsaken in favour of this lands own cultural heritage and Victorian literature, fairy tales, music hall, Lewis Carroll and Tolkien’s epic Lord of the Rings were all utilised to create something wholly original, bearing no similarity to its blues or folk based Californian counterpart.

Syd Barrett’s Pink Floyd and the Soft Machine, house bands at the UFO Club, dominated the London underground early in 1967. In an incredibly creative period the Beatles studio experiments culminated in the groundbreaking Sgt Pepper, bit part players The Misunderstood, The Smoke and The Attack enjoyed cult success whereas Procul Harum and Traffic enjoyed significantly more, ‘A Whiter Shade Of Pale’ and ‘Paper Sun’ symbolising the new age that so many thought had begun that year. Every possible direction was given a hefty sprinkling of psychedelic dust, Cream pushing the boundaries of their base in electric blues, the Incredible String Band doing the same with folk. However, no single figure did more to advance the futuristic agenda of rock than Jimi Hendrix. He delivered a violent, jarring world of sound, examining every aspect of the acid rock template before conquering his homeland at the Monterey Pop Festival in June 1967. And the infamous Summer Of Love had still to run its full course.