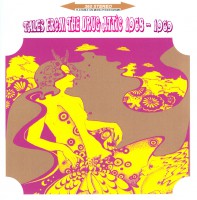 By the summer of 1968, love and peace had turned to hate and war. The Vietnam War rumbled on, Martin Luther King, Che Guevara and Bobby Kennedy were all slain within months of each other, the French government had almost been overthrown by a student and workers revolt, Soviet tanks rolled into Czechoslovakia and campuses across the world were at flashpoint. Whipped and weary from clashes with the establishment, fried and burnt out on chemicals, the counterculture proved powerless as battle lines were drawn between generations, races, genders, ideologies and religions. The drug experience had mutated from mind expansion to just getting wasted. The guerrilla, the motorcycle outlaw and the street punk were replacing the guru and the mystic as heroes of the time. It was the dawn of a rougher, tougher age.

As the world raged around them the musicians who had inspired psychedelia in the first place re-examined their roots, embarrassed by past excesses. The elusive Dylan turned to country, the Byrds went the same way, the Stones back to their twisted blues and the Beatles to every style going as their magic slowly dissolved. Almost every major group dutifully followed suit. However, in Britain psychedelia still lingered as High Street fashion and great, heavily lysergic records continued to be released by provincial bands like the wondrous Skip Bifferty, Apple and Sam Gopal. Even essential slices of conceptual British psych pop like the Small Faces Ogden’s Nut Gone Flake and the Pretty Things S.F. Sorrow were a year or more past their sell by date, despite the latter’s rightful claim as the first ever rock opera. The Who’s proverbial magpie Pete Townsend acknowledged as much, reaping the benefit on his flawed classic Tommy, because unlike the Pretty Things he had moved on from the psychedelic formula.

Pink Floyd had moved on as well, despite losing Syd Barrett to an acid induced psychosis, his ‘Jugband Blues’ recorded the previous year. The Floyd were left in the capable hands of Roger Waters and progressive rock, psychedelias more serious minded sibling. Arthur Brown, the Moody Blues, Caravan, the more obscure Pussy, Quintessence and Steve Hillage’s Arzachel all offered differing elements of what would become known as prog. In America, seeds were also being sown for a much heavier genre, San Francisco bikers Blue Cheer, Ted Nugent’s Amboy Dukes, LA’s Iron Butterfly and Steppenwolf all blending some ferocious heavy rock with acid friendly undertones. Others like Mad River, Spirit, It’s A Beautiful Day, The Youngbloods, Kak, Gandalf, Euphoria and Brazilian loonies OS Mutantes were not so easily definable but still contributed essential pieces to the vast psychedelic jigsaw.

Meanwhile, the former San Francisco elite had been struggling to transfer their fabled live sound for acid heads to record. Re-treading the same old blues and rock’n’roll grooves, neither the Grateful Dead or Quicksilver Messenger Service truly fulfilled their promise while the Steve Miller Band had to re-invent themselves to find a future. The most spectacular success story was Big Brother and the Holding Company. Their album Cheap Thrills hit the top of the charts for eight weeks on the back of a triumphant marketing campaign, destined to make Janis Joplin a star in her own right. As ever, the Jefferson Airplane remained the most consistently successful, closing the decade with renewed political vigour.

The Airplane, the Dead and Janis Joplin all appeared at the Woodstock Aquarian Music and Arts Fair in August 1969, which immediately entered popular culture as shorthand for an era, an attitude and a generation. Jimi Hendrix’s dismembering of the ‘Star Spangled Banner’ became a mystical icon for the whole event, even though Electric Ladyland, produced nine months earlier, defined its time far more effectively than any one festival. As much as Woodstock was viewed as the final flowering of psychedelia so the Stones at Altamont in December was seen as the crucifixion. The few remaining hippies finally realised that the ‘Frisco Hells Angels never did believe in love and peace, but by then nor did anyone else as the seventies beckoned on a tide of distrust and disillusionment.

It’s fitting that sad, mad Syd Barrett ends this odyssey, because more than any other he epitomised the psychedelic age, from innocent beauty to the very edge of reason, lost in the woods with Moby Grapes Skip Spence, 13th Floor Elevator Roky Erikson and the Seeds Sky Saxon. Then there were those eternal martyrs, Hendrix, Joplin and Morrison, who would all be dead shortly after the end of the decade. All of these made their mark on a generation intent on burning away centuries of greed, bigotry and the suffocating moralities of the past. They almost succeeded as well, at the very least introducing a spirit of freedom, change and revolution. Of course, musically psychedelia was the most influential period of them all, the years 1965 to 1969 sketching the blueprint for what followed, transforming pop into rock, entertainment into art, and opening the door to infinite realms of possibility. For better or worse, nothing would be the same again.