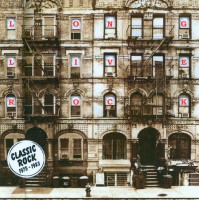 7. Peter Frampton ‘All I Want To Be’ From Frampton Comes Alive LP January 1976

12. Blue Oyster Cult ‘This Ain’t The Summer Of Love’ From Agents Of Fortune LP May 1976

18. The Eagles ‘Life In The Fast Lane’ From Hotel California LP December 1976

3. Patti Smith ‘Because The Night’ From Easter LP March 1978

6. Whitesnake ‘Love To Keep You Warm’ From Trouble LP October 1978

17. Rainbow ‘Stone Cold’ From Straight Between The Eyes LP April 1982

As the Gods of rock retreated deeper and deeper into self imposed exile, their adoring audience gradually began to slide away. By 1975 their bubble had begun to deflate even though at first it was almost impossible to detect, particularly within the well oiled cogs of the American music business where the tried and tested superstars continued in their own sweet way and new genres were either ignored or assimilated into the machine to merge with all the other homogenised crap.

Rock rumbled on as it always had but a few roars of individuality began to be heard above the standard hubbub as precursors to punk. Alex Harvey, The Runaways, Thin Lizzy and Patti Smith all raised more than a few eyebrows but of far more importance, through sheer volume of sales alone, were two gargantuan albums tapping into the widespread feeling of dissatisfaction, seething beneath the Stepford Wives veneer of a bruised post-Vietnam, post-Watergate America.

Even with its easy-on-the-ear slickness, Fleetwood Mac’s Rumours was clearly a tightly wound, cocaine fuelled psycho soap of mammoth proportions, a tangled web of divorce, bitterness and paranoia, while The Eagles Hotel California, released two months earlier, exemplified the Woodstock generations gradual burnout into vacuous, coke spooning, Sunset Strip hedonism. Hotel California and Rumours should have heralded rocks death rattle, especially as the punk revolution finally threatened to overthrow the old guard. But, a new breed of American band suddenly appeared who ultimately would come to define late 70’s/early 80’s rock while simultaneously playing a major part in its downfall.

Reacting to the rising tide of punk, Foreigner, Boston, Kansas, Styx, Journey and the like opted to go in the opposite direction by celebrating professionalism over emotion. They reasoned, quite rightly as it happens,  that not everyone was pissed off, disenfranchised, dissatisfied or seeking change and what American kids really wanted was airbrushed slickness. As their records began to sell by the truckload they became the definitive soundtrack for suburban teens cruising the well manicured neighbourhoods of middle America in their Chevy Nova’s.

In reality these bands were guilty of ripping the heart right out of rock. When metal established itself in the early 80’s these anodyne session men were all that was left standing. Ultimately, their nemesis proved to be MTV because once they were beamed into a billion living rooms, they looked so anonymous their audience deserted them in droves. Of course, a few years down the line, when classic rock came round again, even these bands were exalted more than ever. Infact, if you ask anyone to name a classic rock band most folks will almost certainly only remember Foreigner, or REO Speedwagon or maybe Toto. And that is the reason why classic rock is still derided in some quarters. Up against punk or post punk or electronica it will always sound shallow and meaningless but then so will most things, yet for me that is one of its charms, a place to go to free the mind of the theories, manifestos and agendas of the past, present and future.  Somewhere I too can wallow in the warm, fuzzy glow of nostalgia, when the world was still my oyster and tomorrow still belonged to me.