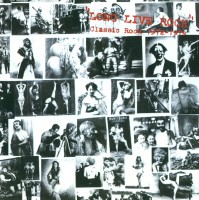 6. Mott The Hoople ‘Jerkin’ Crocus’ From All The Young Dudes LP September 1972

7. Tim Buckley ‘Move With Me’ From Greetings From LA LP October 1972

18. Lynyrd Skynyrd ‘I Ain’t The One’ From Pronounced Leh-Nerd Skin-Nerd LP September 1973

5. The Doobie Brothers ‘Pursuit On 53rd Street’ From What Were Once Vices LP February 1974

16. The Raspberries ‘Overnight Sensation’ From Starting Over LP October 1974

18. Genesis ‘Carpet Crawlers’ From The Lamb Lies Down LP November 1974

19. Grand Funk ‘Some Kind Of Wonderful’ From All The Girls In The World LP December 1974

If rock was the 70’s most far reaching cultural force, its golden age was the three years between 1972 and 1974 which just happened to be when my own fascination peaked, glam giving way to a heavier milieu albeit briefly. It was during these years, as rock went supernova, that the legendary rockstar lifestyle firmly embedded itself in rocks rich tapestry; a time when all turned to excess; when mere mortals became Gods; when half naked, golden haired Adonis’s in the elixir of youth became legends, locked in mansions of chemical euphoria, tended by bare breasted nymphets; when the gulf between these Gods and their audience became irretrievably wide and deep.

And yet, despite the wanton hedonism, it was also a period of incredible diversity, when styles and variations of all types came under the spotlight and an avalanche of classic albums destroyed the misconception that rock was all monolithic and one dimensional. Even at the time there was the feeling that perhaps it had reached its apotheosis.

While a touch of the hard stuff was undoubtedly one of rocks constituent parts powered by the blues or in Black Sabbaths case an even darker force, there was still a huge difference between, say, Deep Purples organ driven heaviness, Free’s primitive strut and Lynyrd Skynyrd’s boogie. And none of them sounded remotely like their forefathers, the malevolent Stones. But the diversity was most noticeable in other less predictable corners; the Laurel Canyon sensitivity of Jackson Browne and Joni Mitchell; the folk leanings of Wishbone Ash; the orchestral pop of ELO; the glam stomp of Slade and The Sweet; the jazzy intelligence of Steely Dan and the alien artfulness of Bowie and Roxy Music.

Despite the obvious differences, all were part of rocks extensive canon as they created their own unique visions expanding its horizons. While some have dated horribly (not surprising given that classic rock represents such a specific time and place), there is a freedom in the records that is liberating and in hindsight it’s perhaps easier to see how once derided bands like Genesis or The Raspberries were really forging new paths or how, no matter how ridiculous this sounds, Rod Stewart was one of the hippest singers around.

Infact, it’s this variety that continues to keep classic rock interesting, even for those not yet born when records like Machine Head, Can’t Buy A Thrill, Goats Head Soup, Brain Salad Surgery or The Lamb Lies Down On Broadway were released. After all, there must be some reason why today’s kids gorge on Guitar Hero and clamour for T-Shirts and merchandise bearing the logo’s and images of long dead bands. Maybe it’s because they hear the music for what it really is, free of pre-programmed prejudices, genre junk or hang ups of cool that cloud the mind and block the ears of my generation for one. Those kids, my kids, don’t care or even know about any of that old crap.