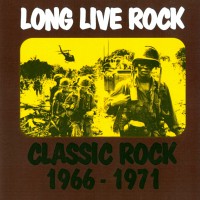 4. Jimi Hendrix Experience ‘Fire’ From Are You Experienced LP May 1967

5. Pretty Things ‘There Will Never Be Another Day’ From Emotions LP May 1967

7. Small Faces ‘Tin Soldier’ From There Are But Four LP February 1968

8. Blood, Sweat And Tears ‘I Love You More Than You’ll Ever Know’ From Child Is Father To The Man LP February 1968

11. Big Brother & The Holding Company ‘I Need A Man To Love’ From Cheap Thrills LP

14. Steppenwolf ‘Jupiters Child’ From At Your Birthday Party LP March 1969

17. Sir Douglas Quintet ‘At The Crossroads’ From Mendocino LP April 1969

20. Jack Bruce ‘He The Richmond’ From Songs For A Tailor LP September 1969

11. Mothers Of Invention ‘Directly From My Heart To You’ From Weasels Ripped My Flesh LP September 1970

If you lived through the late sixties or seventies you would never have heard the term classic rock used to describe any music of the day because unlike psychedelia, proggy, glam or even southern rock it was not a term used at the time but one bestowed in retrospect when the era itself had ended. In the early eighties American youth (because classic rock is a wholly American invention) had been ambushed by the new phenomenon’s of MTV, hair metal and British pops exotic bright young things. No longer besotted by the music of their older brothers and sisters or God forbid their parents, there was no room for any hoary old rockers in their lives, and in an age when being pretty was an absolute necessity, no room for any ugly new ones either. Yes kids, MTV really did kill the radio stars and had a damn good go at wiping out the radio stations too. In sheer desperation, as ratings dropped alarmingly, a bright marketing spark conceived the classic rock concept to lure back those middle aged folks content to wallow in the warm, fuzzy glow of their be-denimed youth.

And that should have been that except what no-one predicted was how this clever rebranding of rocks illustrious yet unhip past would attract such a massive new audience and become so highly regarded. Incredibly, in the absence of any peer pressure to identify with any new genre or generation of music, kids turned to the safety net of the past instead of the uncertainty of the future. And they continue to do so over 30 years late, even though most of the bands are either dead and buried or drawing their pensions.

Now forget those holy deities The Beatles or Dylan, the birth of classic rock can be pinpointed exactly to December 1966 and the release of Cream’s debut Fresh Cream. There would be many better records, not least by Cream themselves , yet it remains a landmark long player representing the birth of hard rock and the power trio whilst signalling a move away from the cheap thrill of singles to the long term allure of the album. Over the next 15 years or so the parameters of rock would be stretched as far as they could go, from singer songwriters to cocaine cowboys, from proggy magicians to no nonsense riffola.

While I was walking this earth at the time, and Bowie, the Velvets, Stones and Zeppelin are still my touchstones, there was only the briefest of moments in the mid 70’s when rock in its truest sense crossed my radar. But, records have a weird habit of coming round again years later, when what was once scorned becomes cool and collectable for no apparent reason. So it was decades later when I began to hear some vaguely familiar sounds blasting from my son’s bedrooms and began to wonder if maybe I’d misjudged all those Old Grey Whistle Test bands with their greasy hair, flared jeans and hairy chests. While their horrendous fashions still look horrendous, much to my surprise I found the records, from such a different world to the one I’d inhabited, strangely fascinating . Long Live Rock is the result of all that, my glimpse into a sound from my early teenage I knew little about but one that, in an Almost Famous kind of way, provides me with an alternative soundtrack of that time.