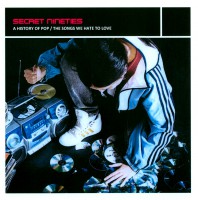 After the immaculate new pop and rock concepts of the eighties, the nineties came as a bit of a shock; a return to seventies values where pop was manufactured chart music for kids and housewives and ‘real’ music was everything else. I wasn’t always sure which was which but it didn’t matter. As our senses were subsumed by a smorgasbord of fractured cultures, aspirations and impulses, the pop song became a lucky dip grab bag of insubstantial noise.

1990 was the last thrilling year before the culture shakedown began. As everything turned day-glo the charts were jammed with grebo and baggy chancers, a skinhead Irish girl beating Prince at his own game, and the daughters of venerable sixties legends sweetly trilling ‘Hold On’, classic Secret Pleasures all. They were the last blast before pop became a dirty word again, struggling for a new direction, groups with nothing much to say trying to keep up with the plethora of new genres, sub genres and micro genres dreamt up by ego trippin’ music journo’s and DJ’s.

All that kept us from drowning in a bucketful of lightweight R&B pop slop was the occasional hit by the likes of Hothouse Flowers, The Waterboys, Crowded House and James. And we could always count on Cher, a Secret Pleasures icon if ever there was one. Embarrassingly, even INXS were worth the odd punt. That’s how desperate the times truly were.

I guess what everyone was doing, subconsciously at least, was awaiting Britpop, the last movement of our time. When it finally arrived, with its short, sharp, songs about real lives rather than luurrrvvvee, it trounced all competition for a good couple of years. But then, along came Oasis with their dull imitations of the Quo playing The Beatles. After that, Britpop just pandered to the lowest common denominator and that just happened to be the horrendous Dad rock of Noel Gallagher. Never before had a man so ignorant been so influential.

And so, as yet another new dawn faded, the nineties ended almost as insignificantly as they had begun. The only groups left standing were the flotsam and jetsam of Britpop, the Johnny and Jane come latelys of the second division. While they bore little resemblance to the original movers and shakers they did leave a handful of pleasurable nuggets, so proving the theory that every group has at least one good song in them. And if they could do it in the nasty nineties, anyone could.